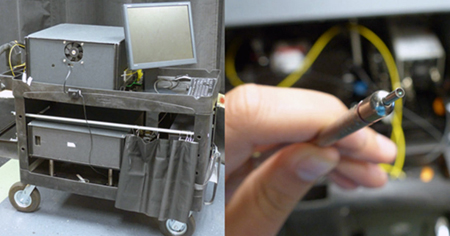 The 3-in-1 probe (right) on its compact utility cart (left).

Researchers from the University of Texas (UT) at Austin's Cockrell School of Engineering have developed a probe that combines in one device three methods of using light to measure the properties of skin tissue and detect cancer. The researchers have begun testing the 3-in-1 device in pilot clinical trials and are partnering with funding agencies and start-up companies to commercialize the device. The work was recently published in Review of Scientific Instruments, from AIP Publishing.

Skin cancers of all types are the most common forms of cancer in North America, and melanoma, the most deadly form of skin cancer, is one of the leading causes of cancer death, killing nearly 10,000 people every year in the United States alone.

Currently, the only certain way to diagnose skin cancer is to perform a biopsy. But determining which lesions to biopsy is not obvious, and for every case of skin cancer detected there are roughly 25 negative biopsies performed, at an estimated cost of $6 billion to the U.S. healthcare system.

James Tunnell, an associate professor in the biomedical engineering department at UT, believes the new probe developed by his team could help reduce the high number and cost of negative biopsies by giving a clear picture of which skin lesions are most likely to be cancerous. He and his colleagues combined three common spectroscopic techniques – Raman spectroscopy, diffuse reflectance spectroscopy, and laser-induced fluorescence spectroscopy – into a single probe to create a more complete picture of a skin lesion. By revealing information invisible to the human eye, the probe could offer a better screening tool for cancer and eliminate many negative biopsies.

Front view of 3-in-1 probe (left) and exploded view (right).

As normal skin becomes cancerous, cell nuclei enlarge, the top layers of skin can thicken and the skin cells can increase their consumption of oxygen and become disorganized, Tunnell said. The changes alter the way light interacts with the tissue. To detect all these changes requires multiple spectroscopic techniques. For example, diffuse optical spectroscopy is sensitive to absorption by proteins such as hemoglobin while Raman spectroscopy is sensitive to vibrational modes of chemical bonds, such as those found in connective tissues, lipids, and cell nuclei.

Previous research efforts have tried combining spectroscopic techniques to aid in skin cancer detection, but the University of Texas team is the first to combine three techniques in a single probe that would be inexpensive enough to be used widely in clinics and doctors’ surgeries. The probe itself is about the size of a pen and the spectroscopic and computer equipment that supports it fits neatly onto a cart that can be wheeled between rooms. Each reading takes about 4.5 seconds to perform. The 3-in-1 nature of the probe saves time and money while still giving a comprehensive examination of the skin properties.

Tunnell commented, “Skin is a natural organ to apply imaging and spectroscopy devices to because of its easy access. Most devices have been at the research stage for the past 10 years or so, but several are now undergoing clinical development. This probe that is able to combine all three spectral modalities is the next critical step to translating spectroscopic technology to the clinic.”

The Discussion section of the Review of Scientific Instruments paper cautions that there are still some discrepancies in data collected by the system which require further work. It states, “The addition of an absorber to a phantom involves extra pipetting steps in order to complete the spectrophotometer measurement, which is not needed for a purely scattering phantom. It is proposed that the lower extraction accuracy of μa compared to μ′s is due to the extra steps, which represent more sources of measurement error due to instrument resolution and calibration and also human error.

"At this stage, we have no definitive explanation for the μa trend of increasing divergence between fitted and expected values with increasing μa values. However, the extra μa measurement steps could offer an explanation as equipment error could be proportional to volume or concentration.

“We assume linear superposition of the two fluorophores, which implies that their measured fluorescence is independent of each other. In reality, these fluorescence signals are coupled as NADH has non-negligible absorption within the visible and will therefore absorb some of collagen's fluorescence emission – the opposite situation will also occur (collagen absorbing some of NADH's fluorescence).

“A more accurate model would include second-order, nonlinear terms to describe this fluorescence emission-absorption overlap; however, previous researchers have successfully applied this linear superposition approach for clinical diagnosis as it still does a very good job of capturing the endogenous fluorescence physics.”