US Marines Humvee to get 25kW laser weapon

Contractor Raytheon says that its planar waveguide optics are the key to delivering enough power to down enemy drones. 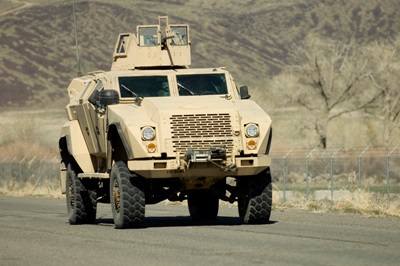 Humvee: ready for a laser upgrade

The US Office of Naval Research (ONR) has awarded Raytheon an $11 million contract to develop a laser weapon with a minimum output power of 25 kW, with the defense firm saying that a demo will be fielded in the “very near future”.

Under the “Ground Based Air Defense (GBAD) Directed Energy On-the-Move Future Naval Capabilities” program, the weapon is expected to be capable of destroying low-flying threats such as enemy drones.

The agreement calls for the field demonstration of a Humvee-mounted, short-range laser weapon system, packaged to meet the US Marine Corps' size, weight and power requirements.

Planar waveguides "key"
The defense contractor explains that its planar waveguide (PWG) optical technology is critical to its particular approach for scaling high-energy lasers by combining beams from a number of sources. “Using a single PWG, the size and shape of a 12 inch ruler, Raytheon high-energy lasers generate sufficient power to effectively engage small aircraft,” claims the firm.

He adds that Raytheon is working towards fielding directed energy weapon systems in the “very near future” with a Marine Humvee demonstration.

Whereas 25 kW is deemed to be sufficient to down drones, it is felt that significantly higher laser powers will be required for tougher, faster-moving targets such as rockets and artillery.

Earlier this year, Northrop Grumman won a $25 million contract to develop a 60 kW laser weapon for the US Army.