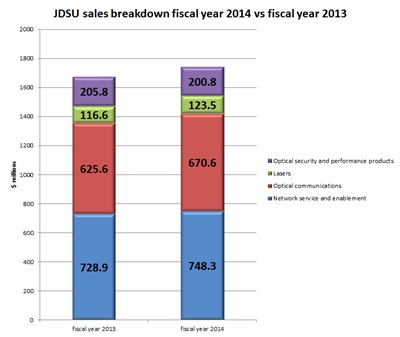 Sales of JDSU’s second-generation industrial fiber lasers jumped sharply in the company’s latest financial quarter, with development partner Amada said to be excited about its prospects in metal cutting applications.

At $11 million, sales of the kilowatt-scale sources were up nearly 90 per cent sequentially. That represents a similar level of sales to the company’s first-generation fiber lasers, but JDSU’s CEO Tom Waechter told an investor conference call that much more was expected this time around.

“The ramp and the adoption by our customer of the Gen2 has gone much, much better than our Gen1. Field deployment at [Amada’s] customers is going quite well and the sales guys are all excited.”

Amada's product line-up includes the "FOL AJ" cutting machine tool, which is available with either a 2 kW or 4 kW fiber laser.

Time-Bandwidth contributes
The bump in JDSU's fiber laser sales was one of the key contributors to a solid increase in revenues for JDSU’s commercial lasers division overall. It registered sales of $40.7 million for the three months that ended June 28, up 44 per cent compared with the same period last year.

The latest quarter also represented the closing period of the company’s fiscal year 2014 – during which it acquired the Swiss ultrafast laser specialist Time-Bandwidth Products. Annual sales of $123.5 million for JDSU’s laser division equated to growth of 6 per cent on the prior year’s total.

Speaking about Time-Bandwidth, Waechter noted that the Zurich-based developer of ultrafast lasers had also experienced increased demand. “We are very excited about the market pull that has resulted from the combination of this innovative technology and JDSU's infrastructure and market reach,” he told investors.

But it is the fiber lasers that is providing the key momentum right now. “I am pleased with the momentum we are building in our commercial lasers business on the strength of our highly differentiated fiber laser product line,” Waechter said.

“Our Gen2 kilowatt fiber laser customer, Amada, is enthusiastic about this new generation of product along with [its] differentiated variable cutting head, and continues to ramp [for] industrial metal cutting as the industry accelerates its conversion from traditional carbon dioxide lasers.”

Although Amada is JDSU’s only customer for the sources at the moment, the CEO is expecting further sales growth for fiber lasers as the Japanese machine tool vendor starts to adopt higher-power sources and targets different applications.

According to the machine tool company, the innovative laser head design uses only two optics in the cutting head itself, but four additional mirrors above the head in the Z-axis, yielding precision control and good edge quality.

3D sensing lull
Meanwhile, although sales of JDSU’s photonic devices (largely laser diodes and optical filters) for applications in gesture recognition and 3D sensing were up strongly across fiscal 2014 as a whole, demand in this sector is currently in something of a lull.

“Looking forward, we do not expect meaningful 3D sensing revenue over the next two quarters,” Waechter warned investors.

However, he added that as new 3D sensing applications for mobile devices, home entertainment and personal computing were adopted, the company ought to be able to capture some high-volume orders.

“[A] major PC-related customer is taking delivery of free production units of our 3D sensing offerings,” Waechter said. “We are working closely with our other customers and consumer electronics [companies] as they look to develop their own usage for 3D sensing.”

And while the CEO admitted that the size of any future market, the timing of deployment and the rate of adoption remained unclear at this stage, he thinks that new applications in 3D sensing still represent a significant business opportunity.

However, for the full year the company’s optical communications division reported 7 per cent growth to post sales of $670.6 million.

Combined with solid growth for JDSU’s large network testing division and a slight dip in sales from its optical security unit, that pushed the firm’s total revenues for fiscal 2014 to $1.74 billion – up 4 per cent from fiscal 2013.