But the solid-state lighting company's stock falls by 10% after a modest financial outlook. 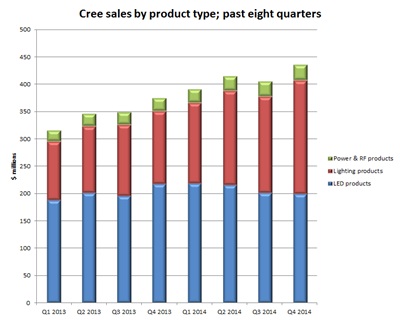 Vertically integrated solid-state lighting company Cree has reported another strong increase in sales in the results for its full fiscal year 2014, which ended June 29.

Annual revenues of $1.65 billion were up nearly one-fifth on the fiscal 2013 figure, with net income of $124 million jumping 43 per cent as the firm reported higher margins on sales of LED products - which accounted for more than half of its yearly revenues.

But investors hoping for a more bullish outlook on the uptake of solid-state lighting appeared disappointed, with the North Carolina company’s stock losing 10 per cent of its value following what was interpreted as modest expectations of growth in the current fiscal quarter.

Long-time CEO Chuck Swoboda said that the record annual revenue represented “another great year”, as the cash generated by the company more than offset some $300 million in capital spending and share repurchases.

“We made great progress in all four of our key objectives for fiscal 2014,” he told an investor conference call. “We continue to lead with innovation across our product lines and drive closer to cost parity with conventional technology by delivering next-generation products that are 30-40 per cent lower cost than the previous generation.”

Lighting trend
The financial details for the fiscal year indicate how Cree is making progress in one of its key objectives - becoming known as a lighting company rather than an LED chip maker. In fiscal year 2014, lighting products accounted for 43 per cent of the company’s sales, up from 36 per cent in fiscal 2013.

At the same time, the proportion of sales attributed to LED products has fallen from 58 per cent to 51 per cent, and in the latest quarter Cree actually made more sales of lighting products than it did of LEDs (see figure above).

However, that trend has a flip side, because the profits made by the company on its sales of LED products are much higher than those classified as “lighting” – for example the popular Cree-branded solid-state lighting bulbs that are now widely sold through Home Depot stores in the US.

Swoboda also highlighted a raft of LED lighting applications involving Cree, including last year's project to transform the eastern span of the Bay Bridge that links San Francisco with Oakland. Some 1600 lighting fixtures deployed on the bridge by partner Musco Lighting are based on more than 50,000 of Cree’s X-Lamp XM-L LED components. The installation is expected to halve energy costs and save on maintenance thanks to a projected lifetime of 15 years.

Other developments include the release of an LED replacement for the widely used “T8” fluorescent lamps, with an expected 30 per cent reduction in energy use, and the "XP-L" single-die LED that delivers a white-light efficacy of more than 200 lumens per watt under a standard 350 mA drive current.

Looking ahead to the new fiscal year, the CEO said that Cree expected to post sales of between $440 million and $465 million for the three months ending September 28, with a slightly reduced gross margin.

That prediction appeared to disappoint the markets, with Cree’s stock down nearly 10 per cent at $44.50 in early trading following the announcement.