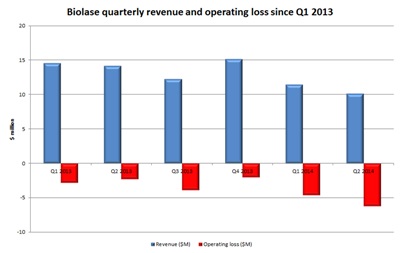 Widening gap: Biolase losses over the past 18 months

Jeffrey Nugent, acting CEO at the dental laser company Biolase, has welcomed the resignation of former chairman and CEO Federico Pignatelli from its board of directors, describing the company’s recent performance as “clearly unacceptable” under Pignatelli’s tenure.

Discussing the firm’s latest quarterly financial results in a conference call with investors, Nugent said that Pignatelli had also withdrawn a threat of litigation issued against Biolase and members of its new senior management team last month.

“We are very pleased [that] Mr. Pignatelli decided to take these actions,” Nugent said. “His decision to resign from the board was the right thing to do and will allow the current board and management team to focus fully on delivering Biolase’s full potential.”

However, long-time director Pignatelli remains convinced that the change in management has been orchestrated by venture investor Oracle Partners, accusing the new senior team of freezing him out in a bid to “raid” the company’s emerging technologies.

With a new tranche of investment in place and $2.9 million of debt with Comerica Bank that has had to be renegotiated several times now paid off, acting CEO Nugent said that a number of additional measures designed to turn the company around had been instigated.

Those include revitalizing the Biolase sales team and evaluating the potential to adapt the firm’s laser technologies in order to target other medical applications.

“Biolase is a great company,” Nugent said. “I’ve learned this as I have been closely watching this company for well over a year. We have great technologies, outstanding employees and we are very confident about its future.”

Turnaround strategy
Part of the turnaround strategy involves what he described as “significant cost reductions”, while simultaneously focusing on quality improvements and increased innovation.

“Quality metrics have not been what they should be and what our customers expect from us,” admitted the acting CEO. “The re-committing [includes] initiatives to ensure shipments that are defect free, and that when problems do occur to resolve them in a timely manner.”

“We are also looking to drive increased innovation by making meaningful improvements to existing products and developing future products that our customers want by actively soliciting customer input and evaluating market data,” Nugent added. “Our aim, in fairly short order, is to have Biolase regarded by the majority of our customers as the most innovative in all categories.”

The resignation of Pignatelli came after an extended period of wrangling between him and the new board of directors as it attempted to wrest control of the company – a recurring theme during Pignatelli’s various stints as Biolase chief and his 23 years as a director of the firm.

A colorful character who has dabbled in fashion and movie production as well as the more prosaic world of dental lasers, Pignatelli became permanent CEO at Biolase in 2010 following a similarly acrimonious boardroom split.

After that, he made a point of principle by claiming an annual salary of just $1 (although Pignatelli was and remains a significant Biolase shareholder), telling optics.org at the time:

“Management should only make money when the company performs, and as the largest single shareholder I will make my money when it does.”

Oracle ‘dictatorship’ accusation
In his letter of resignation, Pignatelli returned to the salary theme in a laundry list of missives about the actions of venture investor Oracle, its managing partner Larry Feinberg and Nugent himself.

Those included what he regards as “excessive” compensation packages and so-called “golden parachutes” for the new Biolase executives, who Pignatelli regards as being controlled solely by Oracle, with the intention of “raiding” the company’s trade secrets and intellectual property.

“I am concerned about the company's future as I foresee a repeat of what happened in the past,” the former CEO said, alleging a “precipitous” exodus of Biolase employees in the wake of the boardroom changes.

“In just over a month, the Oracle-controlled directors have reduced Biolase’s corporate governance from a stockholder democracy to an Oracle dictatorship,” he alleged in his resignation letter.

The latest quarterly figures indicated a sharp fall in financial performance, with sales slipping nearly 30 per cent on the same period last year to $10.2 million and the company’s operating loss widening to $6.2 million. So far this year amid the boardroom distractions, Biolase has racked up a net loss of $11.3 million.

To boost credibility with its dentist customers in the wake of the very public turmoil between Pignatelli and the new senior management team, Biolase has appointed a new advisory board that will be chaired by Sam Low – emeritus professor in periodontics at the University of Florida and a past president of the American Academy of Periodontology.

With an executive search for a permanent CEO now under way, Nugent told investors that a huge distraction for the company had now been cleared out of the way. “We’re putting the pieces in place for a dramatic turnaround,” he said.