Commercial sales up at FLIR Systems

But the thermal imaging giant reports an overall slowdown in sales following its restructuring. 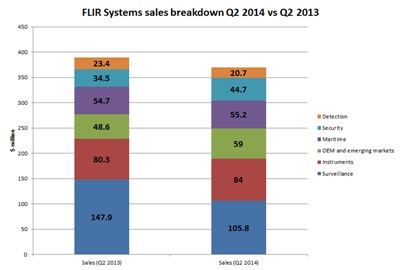 FLIR Systems, which this week released its first smart phone accessory for thermal imaging, has reported sales of $369.4 million for the second quarter of 2014, down 5 per cent compared with the same period last year.

Operating income also fell, by 15 per cent to $59.4 million, but with overall expectations for the year remaining in line with earlier guidance, investors appeared satisfied and the stock moved up slightly in early trading on the Nasdaq exchange.

CEO Andy Teich said that the decline was largely due to a sharp drop in sales of government-oriented surveillance equipment, which fell nearly 30 per cent to just under $106 million in the quarter.

However, much better news was forthcoming from the company’s more commercial business segments, which showed double-digit growth overall, and in particular from FLIR’s newly created OEM and emerging markets and security units.

“Second quarter results were marked by double-digit growth in our commercially-oriented segments and an improved backlog overall," said Teich. "These positive indicators, combined with the anticipated benefit from our restructuring and realignment initiatives, give us confidence in our outlook for the second half of 2014.”

Faster development cycles
Speaking about the imminent introduction of the FLIR ONE smart phone accessory, Teich told an investor conference call to discuss the results:

“The FLIR ONE is our first step in bringing powerful thermal imaging capability to consumer applications. Our strategy continues to be focused on using the product to evaluate mobile applications, while building the awareness of both the FLIR brand and thermal imaging in general.”

FLIR ONE is one of two new commercial products to be based around FLIR’s ultra-compact and low-cost “Lepton” sensor core, the other being its “Mini Bullet” security camera.

Teich is also expecting the launch of FLIR ONE and close interaction with selected application developers – of which there are around 20 at present - to eventually result in much faster development and learning cycles than is typical for a company operating mostly in the defense and security sector.

That Lepton core is slated to feature in a series of new FLIR-branded product launches before the end of this year, and is already shipping in some OEM applications, Teich added. While FLIR ONE should start shipping in early August and will be sold via Apple’s own stores as well as through FLIR’s updated – and now more consumer-friendly – web site, it is not expected to make much of an impact on the company’s overall sales until 2015 at the earliest.

With a backlog of firm orders for delivery within the next year of approximately $548 million as of June 30, FLIR still expects to post sales of between $1.45 billion and $1.55 billion for 2014 overall.

Restructuring costs will eat into the restructured company’s net earnings this year, but FLIR's board of directors has declared a quarterly cash dividend of $0.10 per share, payable September 5.