Firstly, China’s significant investment in its LED manufacturing capacity is paying off, according to market analyst IHS Technology, as its latest market analysis reports the first Chinese company to enter the top ten suppliers to the global market. 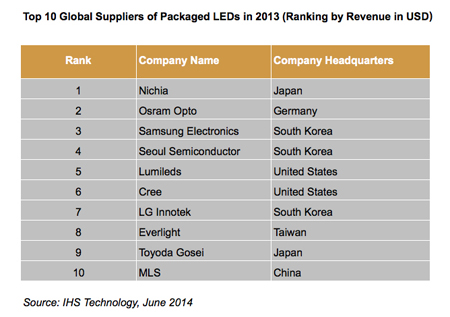 China joins the ranks of the largest global vendors of LEDs.

Shenzen-based MLS Electronics in 2013 rose to the No. 10 rank in the worldwide market for packaged LEDs, up from 14th place in 2012. With the other top 10 players based in South Korea, Japan, the United States, Germany and Taiwan, as presented in the attached figure, this represents a first for China’s burgeoning LED industry.

Jamie Fox, principal LED analyst for IHS, commented, "Since 2011, most of the new LED production capacity that has been added worldwide has occurred in China. So it was inevitable that a Chinese company eventually would join the top 10 LED suppliers. MLS Electronics was first to join the global elite, having established itself as the clear leader in the Chinese market by capitalizing on strong domestic demand. This development represents a clear signal that Chinese firms soon will become major competitors in the global LED business."

MLS Electronics is one of many Chinese LED makers that have sprung up amid the surge in production. However, the other firms do not even rank among the top 20 global suppliers. China’s LED supply base is massive and highly fragmented, with thousands of small manufacturers located across the country.

Alice Tao, China LED analyst at HIS, added, "Despite leading the domestic market, MLS Electronics accounted for less than 10% of Chinese LED revenue in 2013. The next five largest LED suppliers in China accounted for only about 20% of the market."

With the rise of LED manufacturing capacity in China, concerns have risen relating to its overcapacity. Some of the equipment purchased for metal-organic chemical vapor deposition manufacturing, the most important process step in LED production, is now sitting idle in China. Observers have fretted that the overcapacity could result in the shutdown of some Chinese suppliers. However, only a few of the smaller Chinese vendors so far have closed their LED operations. Most of the top companies remain active in the market, with some posting strong profit margins.

MLS Electronics and the smaller Chinese suppliers mostly compete among themselves for a share of the large domestic LED market. The international portion of sales for these companies is very small. At the same, the extremely low prices in the Chinese market make the country inaccessible to overseas suppliers. Because of this, foreign LED makers do not encounter Chinese competitors very often. But that situation is set to change rapidly, according to IHS; the analyst expects the LED revenues of Chinese vendors to grow steadily over time, as the country’s economy continues to grow. Because of this, Chinese LED suppliers will begin to sell more internationally and come into competition with foreign rivals.

IHS also commented on potential barriers to Chinese entry into the world markets outside their own country: both intellectual property and quality are concerns for international customers that are considering Chinese suppliers. However, several factors suggest these concerns could be overcome: patent expirations,;China’s track record in other industries; and China’s sheer volume of manufacturing capacity. 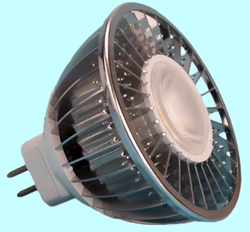 IHS adds that existing top-tier LED suppliers such as Nichia, Osram, Lumileds and Cree so far have seen only a small impact from Chinese vendors. This is especially true in the market for general lighting in regions such as Europe and the Americas. But the analys cautions, “such will not necessarily be the case by the end of the decade.”

Another analyst company predicts that worldwide sales of LED-based Multifaceted Reflector (MR) Lamps will reach $3.32bn in 2018. ElectroniCast Consultants, Aptos, CA, has just released a new market forecast on the global use of LED-based MR compatible lamps, which are used in new construction and retrofitting or replacement lighting.

LED-based MR compatible lamps are similar in shape to halogen MR lamps, and can be used in most fixtures designed for halogen MR lamps. There is a variety of designs, varying significantly with regard to beam width, light color, efficiency and luminous power.

According to ElectroniCast, the global consumption of LED multifaceted reflector lamps was $1.04bn in 2013, which is more than twice the value of 2012. The consumption value will increase at an average annual growth rate of 26.3% and reach $3.32bn in 2018.

Stephen Montgomery, Principal Analyst, LED Practice, at ElectroniCast, said, "During the period 2013-2018, sales of halogen MR lamps will decrease, due to displacement by the LED-based technology. Eventually, as market demand increases for LED-based lamps, the average selling prices for the LED technology will decline at a fast annual pace of 17.8%.” 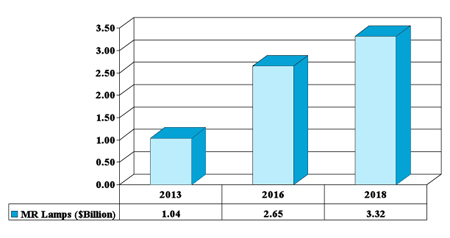 On the up: sales of LED Multifaceted Reflector lamps.

Sales of LED MR lamps in commercial lighting applications will remain the market leader. However, the Government-controlled lighting category and the Residential/Non-Specific applications will also see rapid growth. Also, according to Electronicast's forecast, the MR16 lamp size category will maintain its lead in relative market share versus the MR11 and other size MR lamps.