Optomec partners with GE Aviation, Lockheed Martin, Rolls-Royce and others on $4M effort. 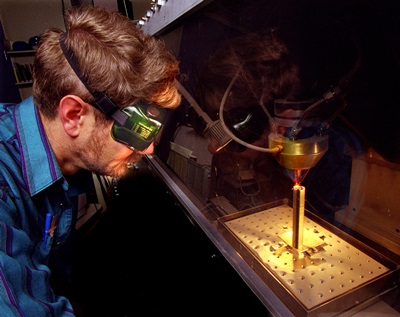 Albuquerque-based additive manufacturing specialist Optomec is to head up a 23-partner team working on new ways of repairing aerospace components for the US Air Force.

Under a $4 million public-private contract awarded through “America Makes”, i.e. the US National Additive Manufacturing Innovation Institute, it will apply a laser technique initially developed at Sandia National Laboratories for metal repairs.

The technique, called “Laser engineered net shaping” (LENS), uses a laser power of up to 4 kW to fuse metal powders into three-dimensional structures layer by layer, guided by a CAD model. Critically, it can add metal onto an existing substrate of almost any three-dimensional shape. In contrast, so-called “powder-bed” processes require a flat, two-dimensional horizontal base.

Optomec, which has been selling LENS systems for more than 15 years, has developed a proprietary powder-feed system to build up the metal layers with high precision. Sandia says that another unique feature of LENS is that it can produce the kind of fully-dense metal components needed for demanding applications like aerospace.

“Microscopy studies show the LENS parts to be fully dense with no compositional degradation. Mechanical testing reveals outstanding as-fabricated mechanical properties,” Sandia says, adding that the metal’s mechanical properties are similar, and sometimes even better than, those made with traditional techniques like casting or forging.

“Repair, don’t replace”
During the new US Air Force project, dubbed “Re-Born in the USA”, Optomec and its partners will focus on advancing LENS technology to the point where it is a reliable, cost-effective alternative to conventional repair processes like manual welding.

There are no fewer than 23 partners working on the $4 million effort, including some of the biggest names in the aerospace and defense sectors.

They are aiming to develop a set of specifications and a knowledge base of best practices for additive manufacturing methods to repair metal aerospace components, for example defining the optimum powder feedstock characteristics, improving process monitoring and control, and creating recommendations for part repairs and applications specifically for the US Air Force.

Richard Grylls, the general manager of Optomec’s LENS operations, will head up the new project. He said in a company statement: “This award is significant because it highlights that repair is indeed a leading application area in the additive manufacturing landscape. Additionally, it helps to demonstrate that printing onto existing structures in 3D space is a unique and enabling aspect of Optomec 3D printing technologies.”

“Together we will demonstrate the benefits of additive manufacturing over traditional welding techniques and enable a ‘repair, don’t replace’ approach to critical part sustainment for high-value aerospace components.”

The two-year project has been funded with a $2.6 million of public money and $1.4 million in cost shares from the private sector. The latest award is Optomec’s third under the “America Makes” initiative this year.