3D system based on spinning prisms from Neptec Technologies will alert controllers to foreign objects on the tarmac. 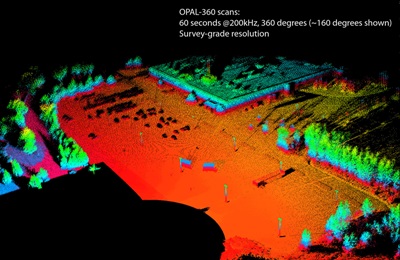 A novel lidar system developed by Ottawa-based Neptec Technologies and designed specifically for harsh, dusty environments is set to improve airport control and safety in Germany.

The “OPAL” (obscurant penetrating auto-synchronous lidar) system, which features spinning prisms, is said to offer a panoramic field of view in all types of weather. It has been selected for a research project by a team at the Technical University of Dresden.

The project, led by TU Dresden air transport technology professor Hartmut Fricke, is looking at how to improve the safety level of airport operations with a real-time 3D surveillance and visualization system for the apron controller – the official in charge of the airport environment.

Collision avoidance
Neptec’s lidar system automatically detects aircraft, vehicles and pedestrians for collision avoidance, and can also alert the apron controller to the presence of any foreign objects with the potential to damage aircraft - the most infamous example of which was the Air France Concorde accident in 2000 that was caused by runway debris damaging engines catastrophically on take-off.

In addition to that, less serious “ground handling” accidents, for example the collision of two aircraft during taxiing, are thought to cost airlines millions of dollars every year.

According to Neptec, the Dresden team selected its OPAL-360 sensor for the project because of its panoramic field of view, options for an extended range of operation and, in particular, a non-overlapping scan pattern that avoids generating "blind spots" while the scanner is stationary.

More conventional lidar scanners designed for autonomous vehicles are said to suffer from those blind spots, but Neptec has developed a proprietary “obscurant-penetrating” technology that it says also enables the lidar system to operate in all types of weather - including fog, rain and dusty conditions.

Spinning prisms
According to the company’s web site, the OPAL-360 system, which operates at a 1540 nm wavelength, offers a maximum stand-off distance of 3 km. Based on an optical concept that uses internal spinning prisms, is has been designed for use in the kind of harsh conditions typically found in the mining and oil and gas industries.

“Unlike conventional approaches to dealing with obscurants, such as range-gating or multi-echo technology, OPAL distinguishes between the lidar returns from obscurant particles versus objects of interest in real-time,” says the firm, adding that no post-processing of the data is required. “This technology works in near zero visibility conditions and has been extensively tested for various types and densities of obscurants.”

Mike Dunbar, Neptec’s director of business development, said in a company statement: "This is another validation of our objective to make it easy to deploy intelligent 3D applications that can operate in all kinds of harsh environments and that improve the safety and productivity of our customers' operations."