Technique to form images without the need for lenses gains improved 3D capability. 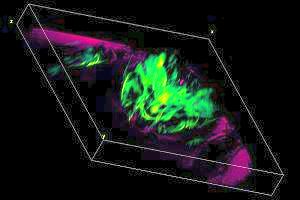 Ptychography is an imaging method that applies algorithms to the diffraction patterns formed when an object is illuminated by coherent light, potentially removing the need for a focusing lens when constructing pictorial data.

Now Phase Focus, a UK-based developer created in 2006 to exploit the potential of ptychography via its proprietary "Virtual Lens", has demonstrated an improved ability to visualize in 3D using a tomographic approach, and imaged specimens to a much-increased depth, and into as many as 34 individual sections.

The research, carried out in cooperation with the universities of Sheffield and York, was published in Optics Express.

"The first breakthroughs in 3D methods were made in 2012 on a lens-less microscope system," Timothy Godden of Phase Focus told Optics.org. "Now we have applied recent developments in both the technique and the algorithms to data collected instead on a conventional microscope. This system allows the specimen to be illuminated with a highly focused 635 nm laser beam, which is the key to obtaining a small sectioning depth."

Those improvements stem from the company's approach to ptychography, which models the propagation of light through a specimen using a multi-slice calculation within the phase retrieval algorithm. The result is a full tomographic reconstruction without the need to move the microscope stage in the z-direction, as in confocal microscopy, or to tilt or rotate the sample, as necessary in other tomographic imaging methods.

Robust algorithm
In practice the system successfully imaged continuous specimens with a lateral resolution of about 1 micron, and an axial resolution - or slice separation - of 2 microns, in samples up to 150 microns thick. Godden commented that this is comparable to the capabilities of confocal microscopy.

"Although it may seem counter-intuitive to apply a lens-less imaging method to a conventional optical microscope, for 3D-imaging the resulting gain in achievable resolution outweighs the slight degradation due to aberrations from the microscope optics," he said. "Such aberrations are, of course, always present in conventional microscopy anyway."

The difficulties in making the system achieve this enhanced performance stemmed mainly from the fact that, in ptychography, the robustness of the algorithms can depend on the complexity of the sample being analyzed. Specimens with features that are strongly scattering, or large items with little change in refractive index, can be challenging for the 3D algorithms, simply because the diffraction patterns become very complex.

Phase Focus found that the answer lay in breaking down the reconstruction process into several intermediate steps, and carefully designing and structuring the illumination so that the 3D information can be extracted from the diffraction patterns.

"Controlled design of the illumination was made possible by [our] unique ability to reconstruct the complex wave field of the laser used to scan the specimens; an important application in itself," said Godden.

One remaining hurdle is to effectively image specimens thicker than 100 microns while still retaining the 2 micron axial resolution benchmark. At present Phase Focus can image samples of millimeter-thickness - but only at lower axial resolution. However, ptychography using the "Virtual Lens" requires no staining or labeling of the cells; a valuable simplification in some key areas of cell biology.

Live cell imaging
Initially a spin-out from the UK’s University of Sheffield, Phase Focus has targeted ptychography at applications in the UV, visible and infrared realm, exploiting the fact that the absence of a lens from the imaging platform means that aberration- and noise-free microscopy could be feasible.

The company currently supplies its "Lens Profiler" platform to the ophthalmology sector, where it can provide quantitative information about the thickness, optical power and oxygen permeability of soft contact lenses.

A ramping up of production of the company's VL 20 and VL 21 imaging platforms for use in label-free live cell imaging is also underway. This is an area where the technique can have significant advantages, due to its high signal-to-noise performance and quantitative measurement of the phase or optical path length, compared to methods which must deal with artifacts such as halos, or in which phase gradients are only inferred.

"Measurement of the phase of low-contrast biological structures provides a rich source of information that can be used to quantitatively assess statistical properties of live cell clusters and colonies," noted Godden. "These include cell volume; thickness; cell count and confluence; and internal structure."

As the technology becomes applied to a wider range of biological applications, Phase Focus is finding that ptychography can also reveal valuable information in new areas, such as the study of primary neuronal cultures or yeast cell colonies - further evidence that there could be a substantial market for the technique.

"We are investing in the development of the 3D technology to add it to our commercial offerings," said Godden. "It will be a little while before it starts to generate revenues, but integration of the 3D technique into a live cell imaging platform represents a new commercial opportunity. Within drug discovery, for example, 3D cell cultures represent a better analogue to in vivo behavior than conventional 2D cell models, yet they are significantly harder to image."