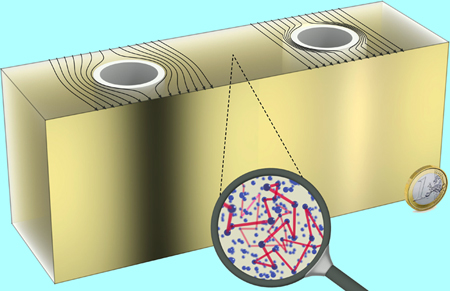 So far, the "invisibility cloaks" created by various labs and developers have generally been complex structures and function only under certain special situations. The laws of physics tend to prevent an optical invisibility cloak from making objects in air properly invisible from any direction, or for all colors and polarizations.

However, if the medium is changed, it becomes much easier to "hide" certain objects. Physicists at Karlsruhe Institute of Technology (KIT) have succeeded in manufacturing by relatively simple means and testing an invisibility cloak that works in diffusive light-scattering media, such as fog or milk. Their results are published in the journal Science

In diffusive media, light no longer propagates linearly, but is scattered permanently by the particles of, for example, fog, clouds, or by frosted glass panes that allow light to pass, while hiding its source. “This property of light-scattering media can be used to hide objects,” says Robert Schittny, lead author of the work. “Our new invisibility cloak has a rather simple structure.”

In the experiment, Schittny used an extended light source to illuminate a Plexiglas tank a few centimetres wide from behind. The tank was filled with a white, turbid liquid. Objects inside cast a visible shadow onto the tank wall. Simple metal cylinders or spheres of a few centimeters in diameter were used as test objects. To hide them, they were first coated with a white dispersion paint, such that the light was reflected in a diffusive manner.

To pass the light around the object, the researchers applied a thin shell made of the transparent silicon material PDMS, to which a certain concentration of light-scattering melamine microparticles was added. The silicon/melamine shell causes a quicker diffusion than in the open air environment and, thus, passed the light around the objects. Hence, they did no longer cast a shadow. “Disappearance of the shadow indicates successful cloaking,” said Schittny.

Martin Wegener, who conducts research at the KIT Institute of Applied Physics and Institute of Nanotechnology, added, “Ideal optical invisibility cloaks in air have a drawback: they violate Einstein’s theory of relativity, which prescribes an upper limit for the speed of light. In diffuse media, in which light is scattered, the effective speed of light is reduced. Therefore, ideal invisibility cloaks can be realized.”

The study performed by Wegener and Schittny was funded by the DFG Center for Functional Nanostructures (CFN) and represents pure fundamental research to demonstrate the principle. Schittny added, “We will have to wait a long time for real applications, but with the help of the principle found, it might be possible to produce frosted glass panes for bathrooms with integrated metal bars or sensors against burglary. These sensors or bars would be invisible from the inside and outside.”