Lasers will play an increasing role in automotive manufacturing, heard the Fraunhofer-organized conference.

by Gregory Flinn
Aside from the emergence of laser-assisted manufacturing – covered in our earlier report from AKL’14 - another central theme at the event was the role played by lasers in automotive manufacture.

Perhaps surprisingly, when the common assumption might be that laser-assisted manufacturing has already reached a high level of penetration in this industry, the reality is actually very different.

For example, according to one attendee at the AKL’14 event, which took place in Aachen, Germany, earlier this month, Honda’s manufacturing facility in the UK still makes no use of laser-assisted manufacturing.

Indeed, across the many potential applications in automotive production, as well as individual manufacturer philosophies and geographical trends, it appears that there is still much ground to be gained by lasers in the industry as a whole.

AKL’14 saw Klaus Löffler, Trumpf’s head of international sales, present a thorough synopsis of where laser technology has a role to play - both now and in the future. 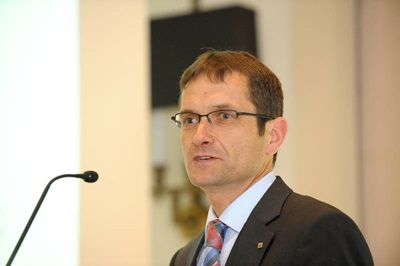 The requisite segmentation in the market is further accentuated by regional variations in climate and customer preferences.

Laser processes are key to achieving some significant benefits in manufacturing – for example faster production times, reduced materials requirements, and more efficient process flow. But it is the achieved weight reductions that contribute directly to improved fuel economy.

This and the contribution made by laser technology to improvements in the drive train – such as improved surface wearing and good compatibility with the emerging era of electric vehicles – are what Löffler called the “two central passive influences on fuel consumption that simultaneously provide the greatest potential for improvement”. In this context, “passive” refers to the indirect benefit of lower vehicle weight, whereas a more efficient engine is described as an “active” influence.

Laser technology also helps support the trend towards greater individualization and customization, this time in the form of laser additive manufacturing (LAM). BMW, for example, already makes use of LAM for component development in commercial vehicles and manufacturing for motorsport applications.

However, the Bavarian car maker says that it wants to see the cost of these processes drop significantly, so that volume manufacture becomes a viable option for the appropriate components. 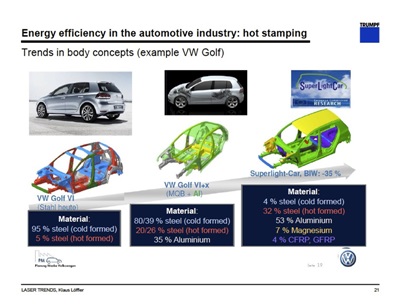 Process development
While the weight savings achieved in modern motor cars represent the most directly tangible benefit for the consumer, it is the process-enabling aspect of laser technology that is helping to accelerate its standing within the industry itself.

Of course, the idea that laser processes enable significant benefits for the automotive industry is not new – optimized material usage and bonding approaches, improved component design as well as better process flow, speed and flexibility are all factors that help realize cost savings during manufacture.

For example, minimal flange sizes, the partial softening (through heating) of those flanges and the removal of AlSi prior to welding all promote the use of so-called “hot stamping” approaches for body component construction, where steel blanks are heated in ovens before being stamped in a press and then cooled under tonnage.

That provides a route to even more rigid structures, as well as further weight reductions that help to maintain a manufacturer’s competitive edge.

Laser bonding is also set to enable the use of a wider variety of materials in future car body construction. So while the current Volkswagen Golf chassis is more-or-less 100 per cent hot- and cold-formed steel, subsequent models will see increasing incorporation of various other metals and non-metals.

Aluminum will appear first, followed by magnesium in the car’s roof and carbon fiber reinforced plastic (CFRP) in the paneling of the boot (i.e. trunk) floor. High-performance plastics will also feature in future “super-light” cars.

Each of those novel materials will need to be cut and, to some extent, bonded with adjoining components, and much research is already in progress here. 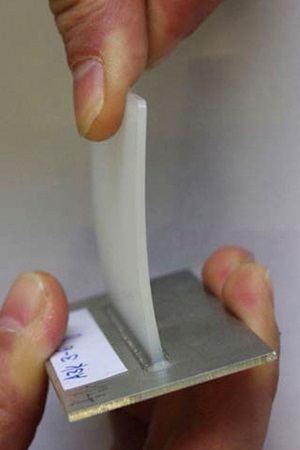 Electric vehicles
The laser technologies that have been developed for automotive applications thus far will also play a role in the manufacture of electrically powered vehicles.

Given the much lower energy density of current batteries when compared with petrol or diesel engines, electric vehicles actually have an even greater need for lightweight body parts and other components, in order to maximize energy use and the driving range between charges.

Here, lasers will play a role beyond just the fabrication of lightweight chassis structures incorporating mixed materials. Electric motors, as well as the appropriate gearboxes, batteries and other components in the associated drive train can all benefit from advances in manufacturing that improve the performance and reduce the weight of the individual components.

Löffler ended his talk with a slide presenting the ultimate goal: zero emissions in car production. And that does not just mean zero emissions in operation, but also in the vehicle’s manufacture and recycling.

While that idealistic goal will remain unattainable for some time, it does appear that lasers will be a major factor helping car makers push at least some way towards it.

If nothing else, the position gained thus far by laser technology in automotive manufacturing appears unlikely to be threatened by key trends like the transition to electric vehicle drive technology. Quite the opposite, in fact.

Gregory Flinn is an independent photonics professional and freelance journalist, with a focus on European strategy, policy and markets.