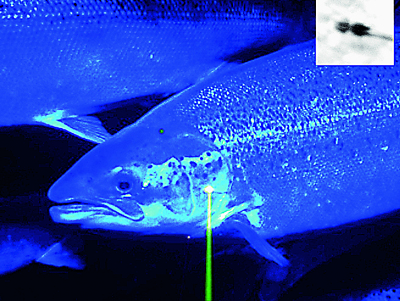 To successfully rid farmed salmon in Norwegian waters from parasites, Stingray Marine Solutions AS is using the precise Jenoptik laser JenLas D2.8, which delivers a green beam. This is installed into a barrel-like casing that is submerged directly into the netted fish pens. While the salmon swim past the device they are scanned by a complex camera systems.

Whenever the outer shape of the so-called sea lice is identified on a salmon’s skin, a short laser impulse is delivered that destroys the tissue of the parasite without damaging the fish. The reaction in real time is enabled by real time software that has been specifically adapted for this purpose. The system is controlled and monitored online which allows this technology to be used permanently.

Stingray Marine describes optical delousing thus: “Optical Sea Lice Treatment s a concept within the aquaculture (fish-farming) industry that has developed from an amazing idea into a concrete reality. By combining camera vision, advanced software and laser treatment, we can remove even an individual sea louse from the fish in a gentle and efficient way.

”While other methods are largely reactive and used as response to high numbers of lice, optical delousing offers a preventive and sustainable alternative. The goal is to perform continuous delousing in order to keep the number of lice down, so that fish farmers avoid carrying out demanding and inexpedient operations.”

The cooperation between Jenoptik and Stingray Marine began at the end of 2012. Since then the idea of combating sea lice with laser has developed into a system which has received several awards for its design and process. One main reason for this is that the use of Stingray units has a positive effect on the environment and the health of the consumers. 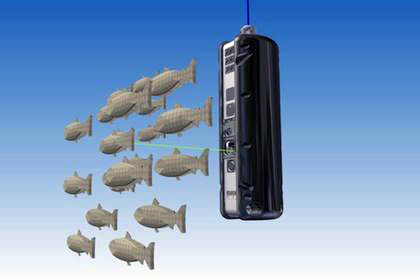 Principle of operation of the Stingray-Unit installed in a salmon fishery.

Previously the 8 to 12 mm-long parasites, which cling to the skin of fish and weaken the salmon, could only be destroyed using chemicals. In the long run this leads to severe damage to the ocean chemistry around the fish farms.

Through the cooperation with the Norwegians, Jenoptik says it is developing a new field of application for its proven laser technology. The JenLas® D2 technology has been a core competence of Jenoptik for the past 14 years.