Technique developed at UK's Rutherford Appleton Laboratory could now be used for non-destructive analysis of artworks. 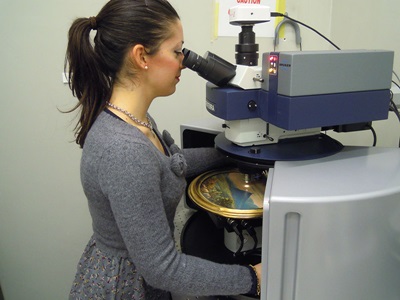 A variation of Raman spectroscopy that has been developed for screening of liquids in airport security could also find use in the non-destructive analysis of artworks, according to new research.

The technique, known as spatially offset Raman spectroscopy (SORS), beats one of the main limitations of conventional Raman – its inability to provide depth information in turbid media – to recover the molecular fingerprints of layers of paint.

Pavel Matousek originally devised the SORS approach at the UK’s Rutherford Appleton Laboratory, home of the Central Laser Facility (CLF). His research team found that when the excitation laser is aimed at a sample, some of the Raman scattered photons traveled much deeper into the sample than had been previously assumed.

This meant that Raman could be more than just a surface analysis technique, and also that layers with different material compositions could be identified using spatial, rather than temporal, rejection of fluorescence – traditionally the Achilles’ heel of the weak signals generated by Raman spectroscopy.

In the latest work, Matousek teamed up with researchers at Italy’s Institute for the Conservation and Promotion of Cultural Heritage (ICVBC) and the Politecnico di Milano to analyze disks made up of common pigments found in paint.

Though powerful, one of the drawbacks of SORS had been that it was unable to resolve Raman signals into layers of much less than a millimeter or so. “This is because the conventional SORS concept uses an excitation laser beam and Raman collection area diameters (as well as spatial offsets) that are typically of the order of a millimeter or higher, precluding the application of the technique to layers that are only several micrometers thick,” wrote the researchers in their Applied Spectroscopy paper.

SORS to ‘micro-SORS’
To alter that for analyzing layers of paint much thinner than a millimeter, they needed to reduce the diameter of the excitation beam, collection area and the spatial offset to just tens of micrometers.

“Building on our earlier SORS research, we’ve transformed the method to allow us to probe the painted layers for the first time,” Matousek said. “We’ve called it ‘micro-SORS’ because we can analyse the layers at the micrometer scale, rather than the usual millimeter scale.”

Using a Bruker Raman spectrometer and Olympus BX51 microscope to test micro-SORS on two- and three-layer samples featuring 50 µm layers, the team found that the approach could distinguish between different pigments - provided that there was no excessive fluorescence. They suggest that the relative simplicity of micro-SORS makes it suitable for development as a portable instrument for in situ analysis.

ICVBC scientist Claudia Conti, who collaborated on the work, said: “When I heard about the potential of SORS and how it could be applied, I realised the huge contribution this method of analysis could bring to the conservation of artworks.”

Following the research, she added: “Micro-SORS promises to make a major contribution to the knowledge and conservation of artworks. We will continue to work with our colleagues at the CLF to take forward this important research. Our ultimate goal is to develop the micro-SORS technology into a portable device that can be used in the field.”

Meanwhile the CLF spin-out company Cobalt Light Systems, which has developed SORS and related instruments for liquid screening and pharmaceutical analysis, has been short-listed for the UK Royal Academy of Engineering’s MacRobert Award.

Up against Rolls-Royce and OptaSense for the prestigious prize, which recognizes commercially significant innovations, Cobalt will find out if it has won at the RAE’s annual awards dinner, taking place at London’s Royal Opera House on July 2.