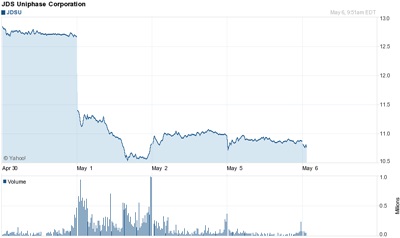 JDSU, the Californian company that sells test equipment for communications networks and a range of optics and photonics products, says that its laser unit booked record orders in the latest financial quarter.

For the three months that ended March 29, total sales were up 3 per cent on last year to $418 million. But despite that and a net loss that shrank from last year’s $28 million to only $1.5 million, the market was unimpressed with JDSU’s near-term outlook. The stock took a 15 per cent hit and is now trading at its lowest value in nearly two years.

Masked by the bigger picture (four-fifths of the company’s revenues relate to networking applications), however, was a sharp upturn in both sales and orders for laser products used outside of the communications sector.

At $30.9 million, laser sales were up by nearly one-third on a sequential basis, thanks partly to growing demand for the company’s latest high-power fiber lasers and also the recent addition of Time-Bandwidth Products, the Swiss firm specializing in ultrafast pulsed lasers.

“We expect continued growth of our fiber laser business throughout this calendar year as we work to rapidly capture business that has traditionally been serviced with CO2 lasers,” he said, with CFO Rex Jackson indicating that fiber laser sales hit nearly $6 million in the quarter.

“We are also pleased with the early progress of our Time-Bandwidth Products acquisition,” Waechter told an investor conference call. "The solid-state laser complements our Q-Series product line and is being positively received by our customers."

3D sensing lull
Developments within the company’s “optical security and performance products” (OSP) segment were not so positive, with sales down both sequentially and year-on-year at $51.1 million.

The OSP division includes anti-counterfeiting technology for applications like banknotes, as well as photonic components used for gesture recognition applications, most famously for the Microsoft Xbox games console.

Now referring to those applications as the more generic “3D sensing”, Waechter said that revenues for these applications – which tend to be volatile due to the sharp swings in demand associated with the consumer electronics industry – were lower than anticipated in the latest quarter.

On the plus side, JDSU has now begun shipping for its first “non-gaming” application in this sector, with bookings up 7.5 per cent compared with last year. After a temporary lull, he is confident of stronger sales growth to a increasingly diverse set of 3D sensing applications having a growing impact in the second half of 2014.