Acquisition of the active optical component manufacturing units throws up 'a number of challenges'. 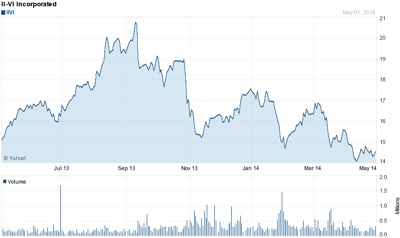 Diversified optics and materials company II-VI has posted record sales for the quarter ending March 31, but admitted that it was having to work even harder than it expected to integrate and streamline the new business units acquired from Oclaro last year.

Revenues from the former Oclaro businesses, which make fiber-based amplifiers and semiconductor lasers for communications and industrial applications, totalled $37.9 million in the quarter, pushing total II-VI sales to $173.6 million – up 21 per cent from the same period last year.

Segment re-organization
But those new units have been loss-making historically, and that situation is yet to change under II-VI’s ownership. Reported as the company’s “active optical products” segment, they generated a loss of $8 million for the period – effectively halving II-VI profits to $8.5 million, from $16.3 million a year ago.

CEO Francis Kramer told an investor conference call: “The challenge of establishing a firm business foundation for the acquired technologies and business is requiring a greater investment than we expected.”

“As our financials indicate, we are experiencing a number of challenges during our start-up mode of integrating these businesses and understanding their nuances.”

Mattera admitted that, in hindsight, the company’s forecasts had been “too aggressive”, and acknowledged that II-VI was lagging behind prior revenue and profitability targets. “But we have found the technology to be as good as we had assessed,” he added.

Tucson closure; possible price increase
Over the past six months, II-VI has been able to wind down some of its reliance on Oclaro ahead of a full transition of the businesses to its own systems, and is negotiating new and improved supply agreements with three contract manufacturers.

It is also set to take full control of the Shenzhen, China, laser module assembly and test operation from Oclaro by the end of June, and is reducing the workforce at one of the acquired units by one-fifth - including the closure of its Tucson, Arizona, operation.

Mattera added that the company was considering a price increase for parts of the high-power industrial laser portfolio, or discontinuing some low-margin and legacy products.

“We have offered our customers the opportunity for a last-time buy to ensure the continuity of supply,” said the COO, who also plans to increase the semiconductor fab’s utilization rate by focusing on “large addressable markets and leading strategic customers”.

“We are determined to improve the predictability, stability and profitability of the business, which was for II-VI a strategic acquisition into semiconductor lasers to fill a major gap in technology platforms,” he concluded, although that same business has been dogged by the unpredictability of the optical communications sector for many years.

With the company’s other units performing reasonably well, Kramer said that he expected a rise in sales in the June quarter – the final three months of II-VI’s fiscal year – to between $175 million and $190 million.

But the losses associated with the Oclaro acquisitions will take their toll on the company’s full-year earnings, which are expected to drop to $0.55-$0.60 per share, compared with $0.90 for fiscal 2013.

Since announcing the Oclaro acquisitions last September, II-VI's stock price has lost around one-third of its value. The latest update appeared to have little effect on market sentiment, with many analysts having anticipated the difficulties of integrating the complex units within the wider company.