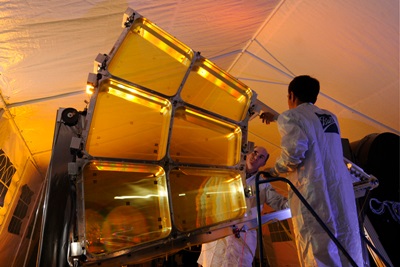 Defense contractor Ball Aerospace says it has completed thermal vacuum environmental tests on critical components for a new kind of telescope that could have a huge impact on imaging from space.

The Membrane Optic Imager Real-Time Exploitation (MOIRE) telescope project, backed by the US Defense Advanced Research Projects Agency (DARPA), promises the ability to capture real-time images and video of anywhere on the surface of Earth.

At the moment, such persistent imagery is impossible because of the varying limitations of both surveillance aircraft and satellites. Even though military aircraft do meet much of the need, the Earth’s surface is so vast that huge numbers would be required to cover it all, while even high-altitude surveillance planes do not fly sufficiently high to observe what DARPA calls “denied territories” that do not want US planes spying on them.

On the other hand, satellites can be placed over any location but the size of the optics that would be required for useful surveillance from a 36,000-kilometer geostationary orbit are simply prohibitive.

But that's only for conventional, heavy, glass optics. The idea with MOIRE was to experiment with a new lightweight polymer structure on the ground, using an etched diffractive membrane optic to focus light onto a sensor. In theory, it could lead to very large-scale optics that could be launched into space cost-effectively. With ground tests now completed, the focus has shifted to space.

One of the key aims of the program, which began four years ago and is now in its second phase, was to examine technologies for manufacturing membranes of up to 20 meters in size, as well as the kinds of structures needed to hold the optics flat. Secondary optical elements would also be needed to turn a diffraction-based component into a wide bandwidth imager. 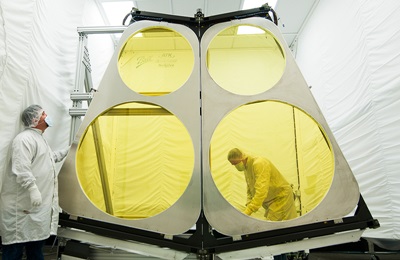 Eye in the sky?

Solid base
Now, says Ball, which landed a $36.9 million contract with DARPA for the project, two important structures have undergone environmental tests designed to simulate the temperature range and vacuum of a space environment. They include the primary mirror’s composite back structure, and the deployment hinges.

He adds that the technology readiness level (TRL) of the key components has been increased, bringing the ability to provide persistent imaging from space a step closer to reality.

As anybody who has tried to use a telescope on a wobbly mount will testify, the solidity of the supporting structure is critical to delivering high-quality images. In space, that means using a highly stable platform for the mirror optics.

MOIRE partner ATK Space Components has developed a lightweight composite back structure with the required stability needed for persistent imaging from geostationary orbit, while Ball has designed and built the deployment hinges that would be used to unfold the primary telescope optic in space.

Since the contract award, Ball has also been incrementally improving the manufacturability of large-collection-area telescopes.

Kaufman added: “By using replicated optics techniques to deliver affordability there is no longer a lengthy manufacturing process of glass mirrors, but instead a process similar to a printing press.”

If successfully launched and unfurled, the envisioned 20 meter-diameter of the multi-lens optical system would represent the largest telescope optics ever made, dwarfing the mirrors of even the largest space telescopes - including the James Webb.