University of Adelaide project coats the inside of structured optical fibers with polymer. 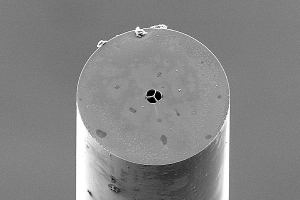 Using photonics techniques to detect explosives is not a new idea. Sensors intended to detect the tell-tale traces of particular chemical compounds or the metal shells containing them from optical and spectroscopic signatures have been under investigation for some time, often designed around optical fibers.

A new sensor from the University of Adelaide finds a novel approach, one which might offer some specific advantages over previous designs. The work was published in the journal Sensors and Actuators B.

The technique is based on the use of microstructured optical fibers (MOFs), in which light is guided along the fiber length by the presence of air holes or voids in the area surrounding the fiber's core.

MOFs have an inherent appeal in sensor applications, since the voids can potentially be used to sample an analyte from the surrounding medium, and allow interaction between it and the light propagating along the fiber. The Adelaide implementation employs suspended-core MOFs, a variant in which the central core is particularly small in diameter, relative to the surrounding air pores.

"Suspended-core MOFs can serve as a convenient platform to enable close interaction between liquids loaded into the pores and a portion of the guided light located in these voids," noted the Adelaide team.

The key advance was to coat the inside of the voids surrounding the core with a particular conjugated polymer, poly[2-methoxy-5-(2-ethylhexyloxy)-1,4-phenylenevinylene], helpfully shortened to MEH-PPV, which is able to act as a fluorescence indicator.

A solution of 1,4-dinitrobenzene (DNB), an explosive compound chemically similar to TNT, was introduced into the MOF voids by simple capillary action. Light from a 488 nm laser was then coupled into the MOF, and the fluorescence intensity from the polymer and its subsequent decay monitored by spectrometer. Changes in the fluorescence lifetime could then be correlated with the concentration of DMB present.

Small and portable
"This is the first time that a MOF has been internally coated with a light-emitting polymer that directly interacts with explosives," commented Georgios Tsiminis from the University's Institute for Photonics and Advanced Sensing (IPAS).

"Standard fibers have in the past been coated on the outside and then used as sensors, but this particular combination of fiber, material and application is, to the best of my knowledge, unique."

The team found that their system's detection limit for DNB in an acetone solution was 6.3 ppm, calculated through analysis of the dynamics of fluorescence quenching. This is not all that far from the limits of detection for TNT and its close relative DNT using more conventional fluorescent-labeled polymer microparticles, according to the team, although absolute detection limits may not prove to be the new system's key benefit.

"This approach does not claim to have the absolute lowest detection limits, but it does have advantages," said Tsiminis. "It is a fiber-based sensor, meaning the actual sensor is small, flexible and interfaces with standard optical equipment straightforwardly. These particular MOFs allow the sampling of minute amounts of liquid samples, around 10 nanolitres, allowing very small samples to be studied."

Another advantage is that the technique is not a simple "yes/no" sensor, and allows the amount of explosive in a sample to be quantified. In its current form the technique only works for TNT-like explosives, but the Adelaide team are working on ways to extend its applicability further and move the technique towards incorporation in a marketable instrument.

"Commercialization of research outputs is something in which IPAS has an excellent track record, but at this point the work acts as a proof-of-principle demonstration," said Tsiminis. "In principle though, the sensor architecture lends itself to miniaturization, and could be incorporated into a portable device for field deployment."