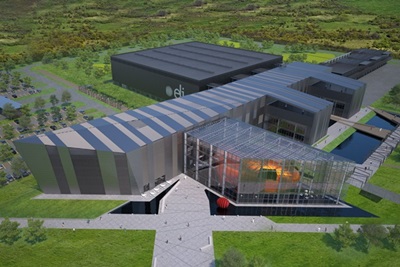 The European Commission has approved a €111 million of investment to build a giant laser in Hungary, via the European Regional Development Fund (ERDF).

The money will be used to construct the third “pillar” of the Extreme Light Infrastructure (ELI) research hub in the EU’s new member states in eastern Europe, and follows similar approvals for cutting-edge lasers in the Czech Republic and Romania.

All three of those lasers will be able to produce extremely high-intensity pulses, with the Hungarian installation designed to focus on the attosecond pulse regime. At such short timescales, it should be possible for scientists to capture the motion of electrons and atoms during chemical reactions.

High repetition rate
The state-of-the art "Attosecond Light Pulse Source” (ALPS) facility will be built near the University of Szeged, and along with the other beamlines is expected to attract hundreds of scientists and skilled workers to the region, and help forge stronger links between industry and the scientific world.

Unlike existing sources, it will be designed to have a high repetition rate – meaning that it should be a very productive tool for researchers working in biology and biophysics, chemistry, materials science, energy research and medicine.

Last year Dimitris Charalambidis from the Foundation for Research and Technology - Hellas (FORTH) on the Greek island of Crete was elected scientific director of ELI-ALPS, along with Károly Osvay as its research technology director. Some 250 scientists are expected to be involved in the project by 2020.

Johannes Hahn, the European Commissioner for Regional Policy, signed off the approval. He said in an EC statement: “This third pillar of ELI is fully in line with EU Regional Policy's main objective to invest in sectors with great growth potential like research and innovation.”

“We have very high hopes for Hungary's ELI-ALPS project. Through it, Hungary, like Romania and the Czech Republic, has a chance to put itself firmly on the map of European research, to retain highly-specialised workers - reversing the 'brain drain', attracting new companies to the region and giving Hungary's young and more established scientists alike new and exciting opportunities.”

Research spending target
According to the EC, Hungary is currently investing 1.3 per cent of its GDP in research and development across the public and private sector. For 2020, it has set a target of 1.8 per cent of GDP, compared with an EU-wide target of 3 per cent.

In the latest newsletter from ELI Beamlines, the Prague-based team’s technical director Bruno Le Garrec said that the facility’s systems engineering team, currently 16 people, would be expanded to 26 by the end of this year.

“Very soon, the SE team will have a lab in Slovanka, mainly for optical purposes but also for testing and prototyping some of the very specific devices that we will be purchased in 2014,” he wrote.

Back in January, the team received the front end of a 10 J pump laser system emitting at 1030 nm, while the award of a contract to Austrian firm Femtolasers to provide the source laser for the “L3” beamline at the facility was announced at SPIE’s Photonics West exhibition in February.

The third pillar in the ELI consortium, known as ELI Nuclear Physics, is set to feature two petawatt-scale beams in a facility near Bucharest. They will be added together coherently to generate intensities of up to 1024 W/cm2 for studies in photonuclear physics.