Powered by a growing range of applications, 3D printing – encompassing laser additive manufacturing at the higher end – will become a mainstream production tool in many industries. Significant growth for this sector is predicted by a brace of new market reports, from analyst firms Lux Research and Canalys.

Lux Research says that the total 3D printing market will nearly quadruple to $12bn in 2025, driven by growth in diverse industries including aerospace, medical, automotive, consumer products, architecture and electronics. In 2025, printer sales alone will be worth $3.2bn, while $2bn will represent formulated materials; $7bn will come from the value of parts produced. 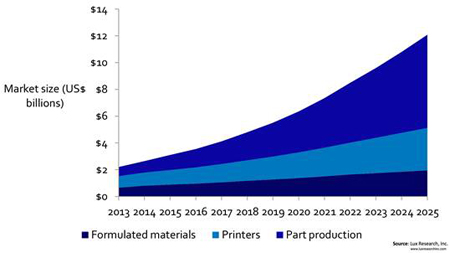 “Consumer uses of 3D printing attract most of the headlines, but industrial uses, from molds and tooling to actual production parts, are quietly having the greatest impact,” said Anthony Vicari, Lux Research Associate and the lead author of the report titled, How 3D Printing Adds Up: Emerging Materials, Processes, Applications, and Business Models.

· The so-called “Razor/blade” model is a hurdle. Much like conventional "2D" printer makers, 3D printer companies often sell formulated materials at a steep mark-up – 10 times to 100 times. This approach was tolerable when companies only used 3D printers for prototyping, but it remains a major impediment to the use of 3DP for production parts, as leaders such as 3D Systems, Stratasys, and EOS restrict third-party materials suppliers from entering the market.

· Four printer companies dominate the market: 3D Systems, Stratasys, EOS and Arcam. These hold a combined 31% printer market share. Of these, Arcam is distinguished by its open materials supply model. Among independent materials suppliers, a clutch of companies – Raymor Industries, Taulman 3D, Made Solid and Ceralink, among them – offers “high potential,” but none is dominant.

· Expiring patents will trigger growth. In 2006, expiration of several early patent families enabled the emergence of lower-cost desktop printers from companies like Makerbot, as well as consumer-facing 3DP services like Shapeways. An even bigger shift is coming as patents on other key 3D printing technologies start to expire over the coming three years, lowering costs for those methods and widening the range of capabilities available to users. 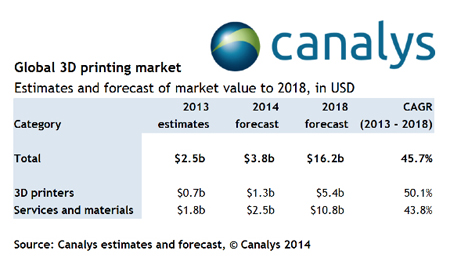 On the up: 3D printing market forecasts to 2018 by Canalys.

“This is a market with enormous growth potential now that the main barriers to up-take are being addressed,” said Canalys Senior Analyst, Tim Shepherd. “Advances in technology are yielding faster print times and enabling objects to be printed in greater combinations of materials, colors and finishes. Crucially, prices are also falling, making the technology an increasingly feasible option for a broad variety of enterprise and consumer uses.”

In the short-term, Canalys expects printing-to-order services to drive considerable growth while penetration lags technology advances. Research analyst Joe Kempton added, “There is a clear opportunity for companies to establish 3D printing service studios to address the growing demand for the custom products that this technology makes possible.”

“That demand will continue to grow, driven by three main factors: customization potential, convenience and manufacturing efficiencies. Items can be printed and personalized to order. They can often be printed locally. 3D printing also promises less material waste and often lower energy consumption than conventional manufacturing processes. There is no doubt that this market is set for robust and significant growth.”

The value of the 3D printer market itself grew 109% in 2013 to $711 million and is forecast to grow 79% in 2014 to hit $1.3 billion. The market value is expected to grow to $5.4 billion by 2018. Value growth will reflect increasing commercial printer volumes and, as such, also drive growth in the volume and value of consumables shipments, including both resistant printing materials and removable or dissolvable support materials.

Canalys’s Shepherd added, “We are at the inflection point for 3D printing. It has now moved from a new and much-hyped, but largely unproven, manufacturing process to a technology with the ability to produce real, innovative, complex and robust products. Expect to see new major entrants making a significant impact in the industry in the coming years, including giants such as HP.”