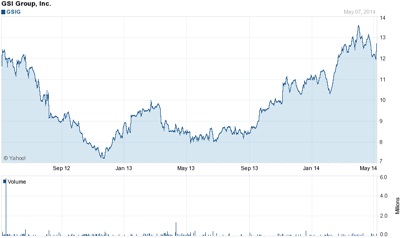 Industrial laser, optical scanner and medical displays vendor GSI Group has reported a 10 per cent annual increase in sales of lasers, helping the wider company to a solid start for fiscal year 2014.

CEO John Roush told investors that despite a dip in sales within GSI’s medical technologies business unit, strength in the lasers and precision motion departments enabled the company to post a 5 per cent overall rise in revenues for the opening quarter, to $79.1 million.

The Massachusetts firm, which has adjusted its financial reports to include the Continuum scientific lasers business as “discontinued operations”, delivered a net profit of just under $1 million for the three months ended March 28.

And although that represented a decline compared with last year, this was largely due to the impact of $1.9 million in losses associated with Continuum. GSI’s Q1 operating profit of $4.1 million, up from $1.5 million a year ago, illustrates the improving picture more clearly.

“Each quarter, it's becoming clear to me that GSI is making tremendous progress as an organization,” Roush told investors. “With an outstanding management team in place and a more attractive portfolio of products and technologies, we're now in a solid position to deliver sustainable profitable growth over time.”

Volume laser order from 3D printing OEM
For 2014, the CEO’s priorities include the integration of its recent acquisition of the machine vision firm Jadak Technologies, which adds to GSI’s presence in the medical sector.

“The acquisition is progressing well and the medical strategy and the cross-fertilization of our customer channels is gaining momentum,” Roush added. “Most, if not all, of our product lines across the company are delivering organic growth as we move through the year and our efforts to improve our operational capabilities are bearing fruit.”

He expects economic conditions to continue improving at a “moderate” rate of growth this year, which should mean a strong year for GSI as it continues to streamline and work to improve management processes across its numerous production sites.

The sale of Continnum, for $7.5 million plus a potential $3 million depending on the division’s revenues in 2014, is expected to complete before the end of the year.

In the meantime, GSI’s other laser units appear to be performing well. The company's laser division posted sales of $41.9 million in the quarter and registered a growing order pipeline. Recently, bookings have been boosted by demand from a 3D printing OEM customer, which has placed what GSI described as “major volume orders”.

The results appeared to impress the markets, with GSI’s stock price closing 6 per cent higher following the announcement, at $12.72. That is equivalent to a market capitalization of around $430 million – having near-doubled in value since late 2012.