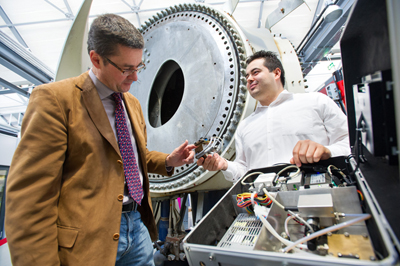 Predictive maintenance of hard-to-access plant, removing unnecessary oil changes, cutting unnecessary laboratory costs and causing less environmental impact. These are just some of the benefits offered by a new optical-based system that monitors the condition of lubricating oils, hydraulic oils and other fluids in industrial systems without interrupting ongoing operations. The method was developed by engineers from the University of Saarbrücken and partners.

The compact sensor system is available as a portable unit or can be integrated into industrial plants, wind turbines and other machinery. The system, which uses laser diode-based optical methods to measure the oil’s chemical makeup and the degree of particle loading, can also predict the optimum time for an oil change.

The engineers led by Professor Andreas Schütze from Saarland Universityand ZeMA, the Centre for Mechatronics and Automation Technology in Saarbrücken, will be showcasing their work from April 7th to April 11th at the Saarland Research and Innovation Stand at Hannover Messe.

At some point, lubricating oil in a machine will no longer act effectively; failing to change the oil at the right time can cause serious damage. According to Professor Schütze, a major problem is identifying the time the oil needs changing. He commented, “As a result, a great deal of effort is expended in changing oil that is still actually useable, which is costly for both the operator and the environment.”

In collaboration with partners from other universities and industry, Schütze’s team at the Lab for Measurement Technology and at ZeMA have developed a measurement system that can be integrated directly into industrial installations where it continuously measures and monitors oil ageing and degradation while the installation continues to operate. The data from the measurement system are currently transmitted by mobile radio communication so that analysis and assessment can be performed off-site. A portable version of the system also exists.

The methods developed by the engineers in Saarbrücken involve shining light into the liquid being monitored. In one case, light from a laser diode is scattered by any particles present in the oil or fluid. “Each different type of particle scatters the light in a particular way, causing more or less light to be measured in the various spatial directions. The scattered light is then recorded by photodiodes and the signals analyzed.

“The system allows us to distinguish between metal dust, other solid particles and air bubbles and to determine the concentration of each,” explains engineer Eliseo Pignanelli, who has been involved in refining the system. The second optical technique measures the absorption of infrared light by the fluid at specific wavelengths as it flows through the measurement system. “This permits us to draw conclusions about the chemical state of the oil, because chemical changes to the oil will cause changes in the light spectrum that we record,” says Pignanelli. This spectroscopic analysis also enables the presence of water in the oil to be detected.

The team of engineers at Saarbrücken have been developing the system in a number of research projects, including the “FluidSens” and “NaMiFlu” projects that are collaborative efforts involving partners from academic institutions and from industry. Industrial partners include HYDAC Electronic GmbH in Gersweiler and EADS Deutschland GmbH (Innovation Works).