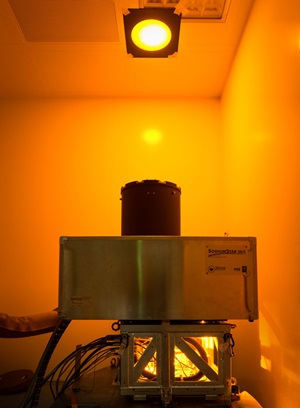 Last week, the European Southern Observatory (ESO) said that it had completed a three-month period of acceptance testing with Toptica’s 22 Watt yellow (589 nm) source, which is tuned to the frequency needed to excite a layer of sodium atoms in the atmosphere to create an artificial “guide star”.

In conjunction with adaptive optics systems, guide stars are used by telescopes to correct distortions caused by turbulence in the Earth’s atmosphere, vastly improving their imaging capability.

Four of the new solid-state sources are now set to be installed on the ESO’s Very Large Telescope (VLT) by August this year, while one spare laser will also be supplied. “First light” with the systems is anticipated in early 2015.

One of the key attributes of the new laser is that it will provide much brighter guide stars than were possible previously, improving the distortion correction capability.

“Five years ago, the options for obtaining high-power, reliable lasers in a compact format suitable for the requirements of the [VLT’s] Adaptive Optics Facility (AOF) were very limited,” announced ESO, adding that the new solid-state technology had “changed the landscape”.

“After three months of acceptance testing at ESO, the project team was very happy with the performance of the new hardware, which holds great promise for simple and stable operation on the VLT in the future,” it said. “This is crucial because these lasers will be used every time an observation is taken with the AOF.”

Brighter guides
The new laser system, developed under a €5.2 million project awarded in 2010, is based around a narrow-band, tunable infrared diode laser with 50 mW output power at 1178 nm. Together with a Raman fiber amplifier stage developed by project collaborator MPB Communications and a frequency-doubling stage it produces a powerful 598 nm source.

That output frequency is actively locked to a high-resolution precision wavelength meter and fired into the sky directly above the telescope, exciting the naturally occurring layer of sodium atoms at an altitude of 90 km

Toptica says that the new technology overcomes the problems found with previous lasers. They were difficult to operate in the high-altitude environment of large telescope facilities (up to 4200 meters), and with minimal heat dissipation.

The laser head that will be directly installed onto the guide star launch telescope can be spatially separated by up to 27 meters from the more bulky pump laser, added the German company, whose design features a patented integrated side-band generation, or “re-pumper” scheme. It is said to increase the return flux dramatically, generating much brighter laser guide stars than was previously possible.

“We are proud that we have already received follow-up orders from other telescope facilities,” said Wilhelm Kaenders, the Toptica president. “Although the technology path for the laser was clear to us very early on, it was the system engineering part that was most demanding.”


Resonant frequencies
ESO explains that one of the key attributes of the new laser is that 80 per cent of its power resonates with the “D2a” transition in sodium atoms, with two side-bands spaced equally either side of this main spectral line each containing 10 per cent of the laser power.

The higher-frequency side-band resonates with the sodium “D2b” transition, and combined with other properties of the laser this is how the laser increases the brightness of the artificial star by up to 2.5 times in comparison with previous versions. “This is a unique feature never routinely used so far in a major observing facility,” ESO said.

Exactly how well the new lasers perform once they are in operation on the telescope will be watched closely by other observatories, especially for projects such as ESO’s forthcoming “Extremely Large Telescope” (ELT), which requires multiple laser guide star units for its own adaptive optics system.