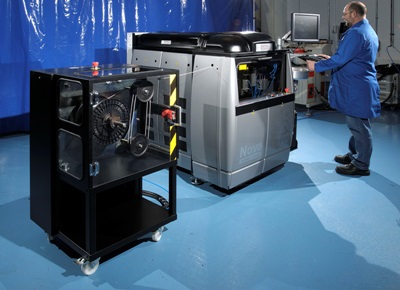 UK-based Spectrum Technologies, which specializes in laser wire processing equipment used widely in aerospace and electronics manufacturing, says rail giant Bombardier Transportation is about to install a high-performance marking system that will help to to make a new generation of rail cars destined for San Francisco.

Spectrum will supply the Canada-headquartered company with a high-speed UV laser wire mark, measure and cut system. Based around a frequency-tripled Nd:YAG laser source, the “Nova 860” system is due to be installed in Bombardier’s Huehuetoca, Mexico, facility before the end of this month.

Bombardier will use it to produce the electrical wiring and interconnect systems needed for a new generation of rail cars set to enter service on San Francisco’s Bay Area Rapid Transit (BART) system from 2017.

The BART New Train Car Project will see the ageing and phenomenally noisy current fleet of BART trains - said to be the oldest still in service in the US – replaced with some 775 new vehicles. That will demand around 4000 miles of electrical wire to be processed.

Aerospace crossover
Spectrum says that the traditional method of wire identification in the rail industry - using pre-marked "heat shrink" plastic sleeves that are placed over the wire ends - adds significant weight and cost to the harnesses.

The new train cars in the environment-conscious Bay Area are required to be as light as possible for maximium energy efficiency, and this is something that the direct wire marking technology can help with.

Spectrum initially developed its Nova wire marking systems for the aerospace industry, where fuel efficiency is a more obvious concern and identification codes are marked directly onto the surface of the wire insulation. It has already provided Bombardier’s aerospace division with 17 UV laser wire marking systems, and lists “every major aircraft manufacturer in the world” among its existing customer base.

The Bridgend, Wales, company says that Bombardier's decision to use the laser technology on the BART project means that the wires can be identified along their whole length with high-quality, permanent identity codes that are resistant to wear, helping with the ongoing maintenance of the cars.

‘Pivotal’ contract
Spectrum Technologies CEO Peter Dickinson said: "This is a pivotal contract for the company. Since start-up we have taken UV laser wire marking technology and developed it into the international aerospace industry standard for wire identification.”

“It has been clear to us for some time that the rail sector could also benefit significantly from the transfer of our innovative technology from the aerospace sector. Bombardier is a global leader in rail technology; this contract is a major breakthrough and opens up a whole new arena for us.”

Dickinson is hopeful that the deal could lead to the technology becoming an industry standard across the international rail sector – something that would significantly expand the company’s potential market.

Spectrum told optics.org that its proprietary UV laser design for wire marking, known as ‘Longbow’, was manufactured to specification by a sub-contractor. 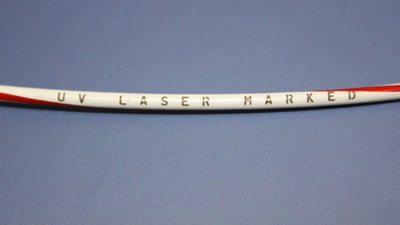 “It's a state-of-the-art, flashlamp-pumped frequency tripled Nd:YAG laser providing exceptional performance and stability,” said the firm. The 355 nm laser delivers 50 mJ pulses at a rate of 50 Hz for the application.