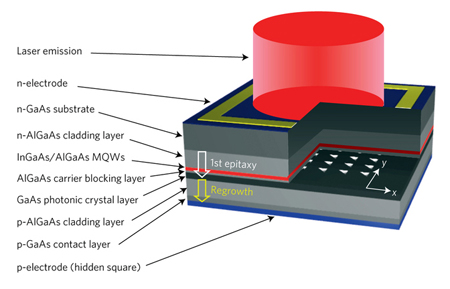 Schematic of the PCSEL structure.

Hamamatsu Photonics, in conjunction with Kyoto University’s Photonics and Electronics Science and Engineering Center and other partners, has developed what they are calling the world’s first watt-level photonics crystal laser; a next-generation semiconductor laser light source.

Some results of the group’s research have recently been published in Nature Photonics and further information will appear in the May 2014 issue of the publication.

The group demonstrated continuous room temperature operation of the new laser, which generated output of 1.5W while maintaining a narrow beam spread of less than 3 degrees. In addition, the group demonstrated the utility of the laser’s high brightness and high output by showing how it can burn through a substance through direct, lens-less irradiation.

These results are a significant milestone for laser-based manufacturing (in Japan), as they lay the groundwork for the future adoption of this new type of laser for laser excitation, wavelength conversion, biotechnology, analytical chemistry, and other applications.

Some of the research was supported by grants from the Japan Science and Technology Agency’s ACCEL Program and from the Photon Frontier Program of Japan’s Ministry of Education, Culture, Sports, Science, and Technology. 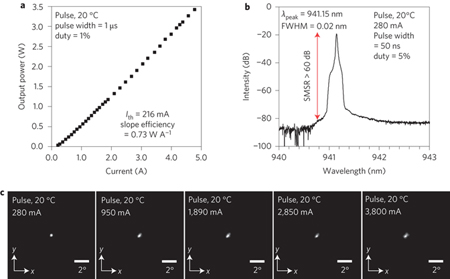 Laser performance: (a)output power versus current, and (b) lasing spectrum.

The Nature Photonics article abstract states, “The applications of surface-emitting lasers, in particular VCSELs, extend to various low-power fields including communications and interconnections.

"However, the fundamental difficulties in increasing output power by more than several milliwatts while maintaining single-mode operation prevent application in higher power fields such as material processing, medicine and nonlinear optics, despite their advantageous properties of circular beams, absence of catastrophic optical damage, and suitability for 2-D integration.