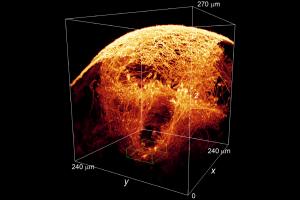 An adaptive optics (AO) technique analogous to one used in astronomy has allowed neuronal processes and subcellular dynamics within the zebrafish embryo brain to be imaged in greater detail than previously possible.

The team that developed the technique at the Janelia Farm Research Campus of Maryland's Howard Hughes Medical Institute described the results as "pretty eye-popping."

The work was published in Nature Methods.

Using an AO approach to remove noise and distortion in microscopy remains a challenge in many specimens, due to the large amplitudes of the wavefront aberrations involved and how dependent they can be on the exact position within the sample.

For some time, Eric Betzig and researchers at HHMI have been investigating a possible solution through the use of guide stars, a principle already honed and employed by astronomers to help compensate for atmospheric interference.

In its astronomical incarnation, the method uses a laser to stimulate a temporary and entirely artificial light source in the upper atmosphere. Monitoring the distortion of that light by the atmosphere allows those distortions to be removed from the incoming light of astronomical objects further away.

The HHMI team has been using a similar principle on biological specimens, creating a small-scale guide star from an isolated fluorescent spot in the tissues, and then imaging it from different angles to assess the relevant corrections needed. But this process takes a long time, and exposes the specimen to a lot of light.

Their new system still uses direct wavefront sensing of light from a guide star, created in a tiny volume of a living sample by two-photon excitation (TPE). But crucially, this guide star does not remain stationary, and is instead swept across a small volume of the specimen using scanning mirrors.

A second key to the new breakthrough is to descan the collected signal, an established technique in fluorescence microscopy which passes the emitted light back through the same pair of scanning mirrors, effectively canceling out the scanning motion. This allows the average wavefront slope to be sampled over the scan volume, and the average aberration to be accurately determined.

A new combination
"Both a TPE guide star and descanning have been tried separately before, but not together," Eric Betzig commented to Optics.org. "Our combination brings many benefits, most importantly that it usually provides a more accurate correction over the subvolume than does correcting at a single point. It averages out extremely high-order modes, which can otherwise confuse the Shack-Hartmann wavefront sensor that determines the aberration."

Other advantages also became apparent, including the spreading out of any damage and bleaching over a larger area, and the removal of the need to identify and target a bright intrinsic feature of the sample to serve as the basis for correction.

The team tested their system in both two-photon-excitation and linear-confocal fluorescence modes, taking aim at a fluorescence-labeled subset of neurons deep in the brain of a living zebrafish embryo. They imaged a volume of 240 x 240 x 270 microns, divided into no fewer than 19,584 corrective subvolumes. The results demonstrated what the team characterized as diffraction-limited performance.

The technique also proved to be distinctly less complex that many previous AO approaches. It was sufficiently fast and noninvasive to suit extended imaging periods in the developing zebrafish embryo, and in the process underscored the spatial variability and complexity of aberrations even in this nominally transparent, optically benign model organism.

"When the microscope is used in its two-photon mode, the adaptive optics work automatically," noted Betzig. "Wavefront measurement occurs simultaneously with TPE imaging, updating its corrections in just 14 milliseconds. Not only is it faster than most other AO applications in microscopy, it requires very few photons to achieve a good correction; which is essential, as many corrections are needed to cover a large volume, and many specimens are rather light sensitive."

The primary disadvantages at present are the need for a Ti-saphhire laser to generate the guide star, and a basic unsuitability for use in targets more highly-scattering than the conveniently transparent zebrafish embryo. To tackle those kinds of sample will need indirect wavefront sensing methods, which Betzig commented were as yet nowhere near as fast or well developed as the new technique.

On the other hand, implementation of the method in scenarios where it can be of use should be relatively straightforward, and Betzig believes it would be fairly easy to design an AO package able to be retrofitted to existing TPE microscopes, fitting in between the laser and the microscope.

Light sheet microscopy
The team's primary motivation for developing a fast and non-invasive direct wavefront-sensing method for covering large volumes in transparent specimens is to apply it to light sheet microscopy, in which fluorescence is generated by a planar sheet of laser illumination.

A particular interest of the HHMI group is Bessel beam light sheet microscopy, a variant of the basic technique employing particularly thin light sheets. This reduces the effects of scattering and other interferences, and is designed to allow imaging within cells at the diffraction limit and beyond.

"I believe the next frontier of cell biology is to take it away from the cover slip and back to the whole organism, where these cells originally evolved," commented Betzig. "Bessel light sheet microscopy is needed for its high speed, high resolution, and great signal-to-noise ratio in 3D specimens; and AO is needed to correct the aberrations to the ingoing Bessel beam and the outgoing fluorescence."