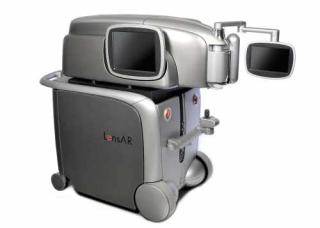 A global agreement has been announced between Lensar and TrueVision 3D Surgical, which will see TrueVision's TrueGuide technology integrated into Lensar's femtosecond-laser-based cataract surgery platform, the Lensar Laser System.

The Lensar platform already includes an imaging system that collects a spectrum of biometric data and reconstructs a 3D model of the anterior segment of the eye, using what the company characterizes as "Augmented Reality technology." This model then assists surgeons in precisely placing the femtosecond laser pulses to suit the particular cataract involved.

TrueVision 3D Surgical, a California-based developer of digital 3D visualization and guidance systems for microsurgery, designed its TrueGuide system to generate templates for astigmatism correction and advanced lens placement. It presents clinicians with both on-screen overlays and graphical alignment charts, or nomograms.

"Surgeons using the Lensar Laser System with our proprietary Augmented Reality image and guidance will now have the added benefit of TrueVision’s overlay and nomogram which will be incorporated seamlessly into Lensar's efficient surgical suite,” said Nick Curtis, Lensar CEO.

The Lensar platform employs a femtosecond laser in order to exploit the increased precision that an ultrafast source brings to cataract procedures, compared to older and more potentially invasive techniques. In October 2013 it closed a financing round worth $87 million, saying that it intended to invest in its US sales force and continue to roll out the system around the world.

ASCRS announcements
The Lensar news was announced at the annual symposium and congress of the American Society of Cataract and Refractive Surgery (ASCRS), held in Boston. Other announcements and new products unveiled at the congress included:

• Carl Zeiss Meditec showcased the Zeiss Cataract Suite, an integrated platform built around the company's computer-assisted surgery system called Callisto eye. This allows surgeons to see a variety of digital overlays during an ophthalmic procedure, appearing directly in the eyepiece of an Opmi Lumera 700 surgical microscope which forms part of the instrument suite.

Zeiss also indicated that the continuing US clinical trail of the SMILE procedure, a minimally invasive refractive surgery technique in which a thin disk of tissue inside the cornea is extracted through a small opening, had shown "promising results to date." In December 2013, the FDA approved an extension of the trial to include myopia of up to -10.0 diopters.

• Calhoun Vision presented new clinical information about its Light Adjustable Lens (LAL), said to be the first intraocular lens intended to be modified after initial implantation in order to allow it to be tailored to a patient's individual needs.

The California-based developer employs biocompatible photosensitive materials in the LAL, which is implanted via standard cataract surgery. After the patient has healed, application of UV light onto the LAL causes photopolymerization in the irradiated regions, initiating change in the lens curvature and an adjustment of its power.

Data from a German study indicated that 88 percent of subjects who received the LAL achieved distance vision of 20/20 or better without glasses, and that 97 percent of treated eyes came within one quarter diopter of the intended refractive target.

The LAL is classed as an investigational device and is currently in Phase III clinical trials in the US. It has CE Mark approval and is available to patients in several European countries and Mexico.

• ReVision Optics, California, showed the latest results from trials of its Raindrop Near Vision Inlay, a hydrogel corneal inlay designed to correct presbyopia by adjusting the profile of the cornea. The 30-micron-thick inlay is fitted via a 150 micron flap cut by a femtosecond laser, and if necessary can be removed safely after implantation.

Presentations at the ASCRS meeting showed that Raindrop produced improvements in both near- and distance-vision that were better than those from monovision LASIK, according to the company, with overall patient satisfaction said to be running at 98 percent. Controlling the dimensions of the flap is necessary, however, and the accuracy of incision provided by the femtosecond source is a significant factor.

The Raindrop inlay is also currently limited to limited to investigational use in the US, but has received CE-mark approval for commercial sale in the European Union.