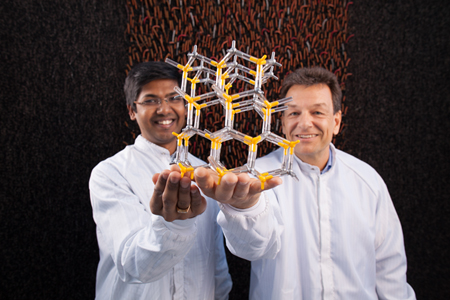 Changes at the atom level in nanowires present significant possibilities for improving solar cells and LED lighting. Researchers at the Norwegian University of Science and Technology, Trondheim, (NTNU) have discovered that by tuning a small strain on single nanowires they can make them more effective in LEDs and solar cells.

NTNU’s Dheeraj Dasa and Helge Weman, from the Department of Electronics & Telecommunications, have, in cooperation with IBM, found that gallium arsenide can be tuned to function as efficiently as a single LED or as a photodetector. This is facilitated by the special hexagonal crystal structure, referred to as wurtzite, which the NTNU researchers have grown in the MBE lab at NTNU. The results were this month published in Nature Communications.

The past few years have seen significant breakthroughs in nanowire and graphene research at NTNU. In 2010, Professors Helge Weman, Bjørn-Ove Fimland and Ton van Helvoort and their academic group went public with their first groundbreaking discoveries within the field.

Weman commented, “Our discovery was that we could manipulate the crystal structure, atom by atom, during the growth of the nanowires. This opened up vast new possibilities. We were among the first in the world to be able to create a new gallium arsenide material with a different crystal structure.” 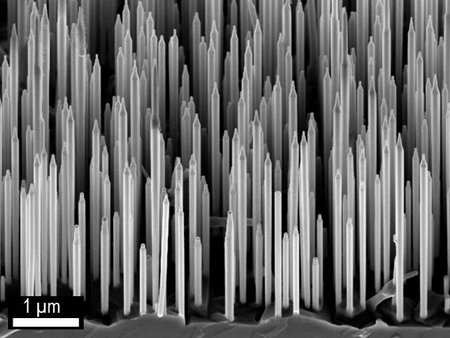 For better for wurtzite: novel nanowires.

The next big news came in 2012, when the researchers managed to make semiconductor nanowires grow on graphene. The NTNU scientists believe that, over time, graphene could replace silicon as a component in electronic circuits. He added, “Graphene conducts electricity 100 times faster than silicon, and is only one atom thick, while a silicon wafer is normally millions of times thicker. Graphene will also likely be cheaper than silicon in just a few years.”

Weman and his NTNU co-founders Bjørn-Ove Fimland and Dong-Chul Kim have established the company CrayoNano AS, working with a patented invention that grows semiconductor nanowires on graphene. The method is molecular beam epitaxy (MBE), and the hybrid material has shown good electric and optical properties.

“We are showing how to use graphene to make much more effective and flexible electronic products, initially solar cells and white light-emitting diodes (LED). The future holds much more advanced applications,” says Weman. “Our goal is to create solar cells that are more effective than when they are made with thin film technology.”

CrayoNano group is now starting to grow gallium nitride nanowires for use in white light-emitting diodes. Weman added, “One of our objectives is to create gallium nitride nanowires in a newly installed MBE machine at NTNU to create light-emitting diodes with better optical properties – and grow them on graphene to make them flexible, lightweight and strong.”

The following video shows the growth of GaAs nanowires on graphene: