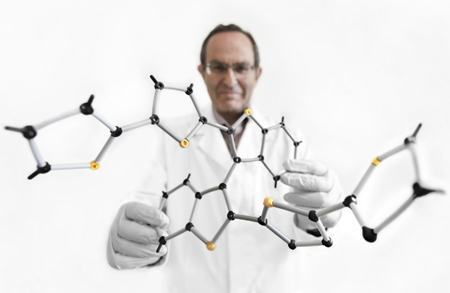 Model of the polymer held by Prof. Włodzimierz Kutner of Polish Academy of Sciences.

Electrically-controlled glasses with continuously adjustable transparency, polarisation filters, and even chemosensors that detect single molecules of specific chemicals could be fabricated using a new polymer that combines optical and electrical properties.

A team of chemists from Italy, Germany, and Poland have developed the polymer which has unique optical and electric properties: components of this polymer change their spatial configuration depending on the electric potential applied. In turn, the polarisation of transmitted light is affected.

The material can be used, for instance, in polarisation filters and window glasses with continuously adjustable transparency. Due to its mechanical properties, the polymer is also suitable for fabrication of chemical sensors for selective detection and determination of optically active (chiral) forms of an analyte.

Prof. Włodzimierz Kutner from the Institute of Physical Chemistry of the Polish Academy of Sciences, Warsaw, one of the initiators of the research, added, “Until now, to give polymers chiral properties, chiral pendants were attached to the polymer backbone. In such designs the polymer was used as a scaffold only. Our new polymer is exceptional, with chirality inherent to it, and with no pending groups. The polymer is both a scaffold and an optically active chiral structure. Moreover, the polymer conducts electricity.”

The polymer presented by Prof. Sannicolo's team was developed on the basis of thiophene, an organic compound composed of a five-member aromatic ring containing a sulfur atom. Thiophene polymerisation gives rise to a chemically stable polymer of high conductivity. The basic component of the new polymer – its monomer – is made of a dimer with two halves each made of two thiophene rings and one thianaphthene unit (see photo, above).

The two halves are connected at a single point and can partially be rotated with respect to each other by applying electric potential. Depending on the orientation of the halves, the new polymer either assumes or looses chirality. This behaviour is fully reversible and resembles a breathing system, whereas the “chiral breathing” is controlled by an external electric potential.

The development of the polymer was initiated thanks to the research on molecular imprinting pursued at the Institute of Physical Chemistry of the Polish Academy of Sciences. The research resulted, for instance, in the development of polymers used as recognizing units (receptors) in chemosensors, capable of selective capturing of molecules of various analytes, for instance nicotine, and also melamine, a chemical that is detrimental to human health, which has been mis-used as an additive to falsify protein content in milk and dairy products produced in China.

Spectroelectrochemical studies on the new polymer were carried out by researchers from the Leibniz Institute of Solid State and Materials Research (IFW) in Dresden.

The use and control of nano-structured materials is of great importance for the development of new environmentally friendly materials, more efficient energy sources and biosensors for medical analysis. The European Noblesse project is boosting Polish Academy of Sciences's capabilities to research these developments.

Nanotechnology is helping to considerably improve, even revolutionise, many technology and industry sectors. Such is the scope for the development and application of nanotechnology that nano-structured materials are in high demand. To meet this demand, nano-science institutes need to rise to the challenges that modern society presents.