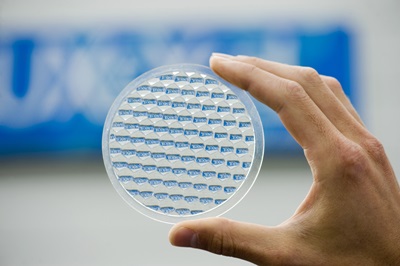 Luxexcel, the printed optical component specialist based in The Netherlands, is investing in a new 3D printing factory to support batch production of optics for LED lighting applications – with the potential to further scale manufacturing quantities to millions of pieces.

Made possible by a recent funding round supporting the company and its so-called “Printoptical” additive manufacturing approach, Luxexcel says that the first housing and installation activities at the site near its headquarters in Goes are under way, in a bid to ensure that a first digital production line will be operational by the second half of 2014.

The company says that its one-step “CAD-to-Optic” 3D printing process delivers smooth optical components that do not require any post-processing. “This ability offers LED lighting manufacturers significant cost and time savings for rapid prototyping and manufacturing,” claims the firm.

The big idea is that this approach gives optics and lighting designers the kind of freedom and flexibility associated with “on demand” 3D printing that is already attracting widespread attention in other industry sectors.

Richard van de Vrie, the company’s founder and CEO, said: "We are changing the way optics are designed, produced, and now digitally stored. Our new printers will enable us to print very precise LED lighting optics and will allow us to jet new optical materials. This increases the design capabilities we offer to optical designers and enables the LED industry to customize per application, project or even single product.”

Joris Biskop, the company’s CTO, said: “I am proud our team has developed a specific printer that will deliver both speed and precision in the manufacturing of optics. This is a foundation for further innovation in the 3D printing of optics. I am confident that with the support we get from our customers, partners and universities, our capabilities will further improve rapidly.”

The company told optics.org that, once completed, the production facility would enable “easy and fast” prototyping, combined with the ability to upgrade prototypes to production batches.

“It is hard to be specific [on production volumes, but] we aim to be able to service batches between one and several 10,000 pieces in the first months,” it said. “However, our printers are improving continuously in speed, precision and jet-ability [sic] of materials. The process is easy scalable to millions of pieces.”

The firm’s major current focus is the LED lighting sector, and Luxexcel is highlighting its technology at this week’s Light+Building exhibition in Frankfurt, Germany.

But the company says that it has also received interest in its printed optics from “leading players” in other applications, for example for ophthalmic lenses and from the automotive sector.

Its patented technology is based around a piezoelectric controllable print head that deposits material subsequently cured with ultraviolet light.

In January, the cleantech investment specialist Munich Venture Partners joined existing Luxexcel investors Chrysalix SET and Filsa Capital in what the company said was a funding round worth “several million” euros.