Fourth and final instrument at the heart of the space telescope installed at NASA Goddard. 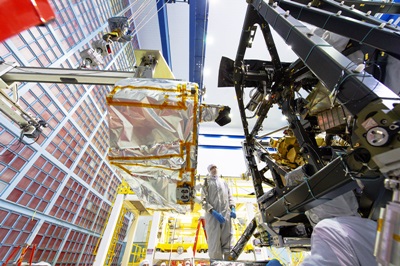 Engineers at NASA’s Goddard Space Flight Center in Maryland have now assembled the four scientific instruments that will sit at the heart of the James Webb Space Telescope (JWST) and analyze light from the very edge of the universe.

The final instrument – the near-infrared spectrograph (NIRSpec) provided by the European Space Agency (ESA) and built by Airbus Defence and Space in Germany – was fitted shortly after another key element, the near-infrared camera (NIRCam), was slotted into place.

NIRSpec and NIRCam sit together with two more scientific instruments, a mid-infrared imager (MIRI) and spectrograph that was built by ESA and NASA’s Jet Propulsion Laboratory, and a fine guidance sensor and near-infrared imager provided by the Canadian Space Agency.

Securing NIRSpec is regarded as a major milestone for JWST, and comes after ten years of work by the ESA, NASA, and Airbus team. Weighing just under 200 kg, it was suspended from a moveable counterweight while engineers moved it painstakingly into its position within the Integrated Science Instrument Module (ISIM).

Maurice te Plate, ESA’s system integration and test manager for JWST, said: “NIRSpec is a multi-object spectrograph, which means it will be capable of observing 100 objects in the cosmos simultaneously. For each of these objects the captured light will be unraveled into a spectrum.” 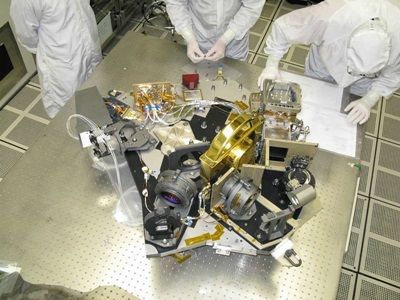 Wavefront sensor
Together with the three other scientific instruments, NIRSpec will capture and analyze light from the earliest luminous glows that followed the Big Bang, helping astronomers to better understand how the very first stellar systems formed.

It will operate from the red end of the visible spectrum at 600 nm through to 5 microns, enabling large spectroscopic surveys of faint galaxies at a high red-shift, and obtain spectra of transiting exoplanets and image line emission from proto-planetary disks and proto-stars – shedding light on the early development of our very own solar system.

The NIRCam instrument, built by the University of Arizona and Lockheed Martin, also acts as a wavefront sensor to ensure perfect matching of the images collected by JWST’s various mirror segments - effectively creating a diffraction-limited 6.6 m space telescope from what would otherwise be 18 individual and overlapping 1.3 m telescopes.

NIRCam also features no fewer than ten mercury-cadmium-telluride (HgCdTe) detector arrays to detect light in the 600nm-5 micron wavelength range, and is JWST’s primary imager. Recent problems with a harness – as well as the bad weather in the US – had delayed NIRCam’s integration within the ISIM module for a month.

With the key scientific instrumentation now in place, attention will turn towards integrating ISIM with the rest of the telescope hardware and preparing the entire payload for its planned launch in 2018.

In its presidential budget request last month, NASA earmarked $645 million for JWST developments in fiscal year 2015, a period that should see delivery of the primary mirror backplane and backplane support to the Goddard Space Center.