Improved version of Laser Weapon System soon to be installed on USS Ponce for at-sea testing. 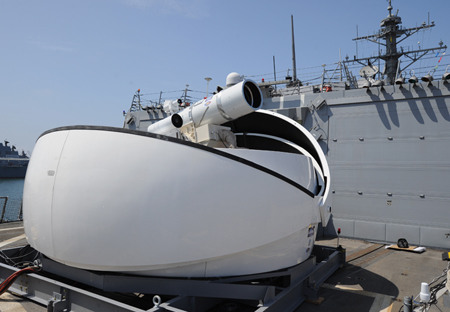 US Navy engineers are now making final adjustments to a laser weapon prototype that will be the first of its kind to deploy aboard a ship late this summer (2014). The prototype, an improved version of the Laser Weapon System (LaWS), is being installed on USS Ponce for at-sea testing in the Persian Gulf, as previously reported by optics.org.

”This is a revolutionary capability,” said Chief of Naval Research Rear Admiral Matthew Klunder. “It's absolutely critical that we get this out to sea with our Sailors for these trials, because this very affordable technology is going to change the way we fight and save lives.”

US Navy leaders have made directed-energy weapons a top priority to counter what they call asymmetric threats, including unmanned and light aircraft and small attack boats that could be used to deny US forces access to certain areas. They believe that high-energy lasers offer an affordable and safe way to target these threats with extreme precision and an unlimited magazine.

"Our nation's adversaries are pursuing a variety of ways to try and restrict our freedom to operate," Klunder said. "Spending about $1 per shot of a directed-energy source that never runs out gives us an alternative to firing costly munitions at inexpensive threats."

Klunder leads the Office of Naval Research (ONR), which has worked with the Naval Sea Systems Command, Naval Research Laboratory, Naval Surface Warfare Center Dahlgren Division and others to develop powerful directed-energy weapons. The US Navy already has demonstrated the effectiveness of lasers in a variety of maritime settings. In a 2011 demonstration, a laser was used to defeat multiple small boat threats from a destroyer. In 2012, LaWS downed several unmanned aircraft in tests.

Over the past several months, working under the ONR Quick Reaction Capability program, a team of Navy engineers and scientists have upgraded LaWS, and proved that targets tracked with a Phalanx Close-In Weapon can be easily handed over to the laser's targeting and tracking system. The result is a weapon system with a single laser weapon control console, manned by a surface warfare weapons officer aboard USS Ponce who can operate all functions of the laser, using a video game-like controller.

Data regarding accuracy, lethality and other factors from the Ponce deployment will guide the development of even more capable weapons under ONR's Solid-State Laser - Technology Maturation program. Under this program, industry teams led by Northrop Grumman, BAE Systems and Raytheon Corp. have been selected to develop cost-effective, combat-ready laser prototypes that could be installed on vessels such as guided-missile destroyers and the Littoral Combat Ship in 2016.

The Navy will decide in 2015 which, if any, of the three industry prototypes are suitable to move forward and begin initial ship installation for further testing. "We are in the midst of a pivotal transition with a technology that will keep our Sailors and Marines safe and well-defended for years to come," said Peter Morrison, ONR program manager for SSL-TM. "We believe the deployment on Ponce and SSL-TM will pave the way for a future acquisition program of record so we can provide this capability across the fleet."