VDMA's Photonics Congress forecasts rapid growth of the sector in Germany and beyond. 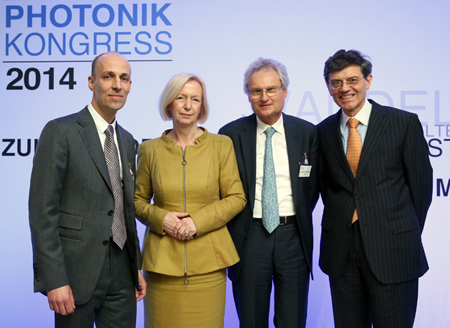 Industrialists and politicians mingled at Photonics Congress 2014 in Berlin.

At last month’s Photonics Congress 2014, which was hosted in Berlin by the VDMA, Germany’s Engineering federation, the 300-plus photonics sector delegates heard a range of presentations on opportunities and risks facing the industry from globalization and other developments in social and technical fields.

The VDMA announced that in both Germany and internationally, photonics is a key driver of innovation: "In a fiercely competitive environment, this field of technology is associated with a highly dynamic evolution with a global market volume expected to reach about €615 billion by 2020". Between now and then, this expansion would equate to an average annual growth rate one-and-a-half times that expected for the general global GDP.

“We are cooperating closely with the relevant industrial associations and federal ministries to take the message to politics, press, qualified young workers, and potential investors about the pre-eminent significance of this key technology in safeguarding the future,” Thilo Brodtmann, Deputy Executive Director of the VDMA, told the congress.

The technologies covered by the VDMA’s analysis include photonic-assisted manufacturing technology with lasers and laser systems for material processing; industrial image processing; measurement technology and instrumentation; flat panel displays; photovoltaic equipment; and electronic production segments, specifically lithography systems. The association added that in spite of the weaker growth over the past two years, there are “good prospects of long-term growth for the German photonics industry”. 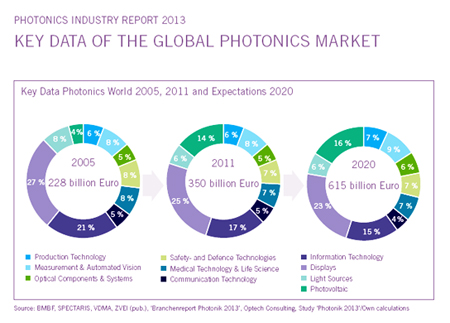 For 2013, Germany’s photonics sector growth rate is expected to have been about 3%, reflecting complete involvement in global trading. And for 2014, economic indicators suggest a return to the longer-term growth trend.

Germany’s target turnover of €44 billion, predicted by the sector in 2013, will be achieved by 2020. The growth of the photonics industry in Germany has been boosted significantly by the core fields aligned to manufacturing technology, such as laser machining, lithography, image processing, and measurement technology and instrumentation.

The VDMA announced that Germany’s share of the global photonics market will grow to 20%, considerably higher than its average 8% share across the whole technology field. This can be explained by the country’s high export ratio (averaging 66 per cent) “with the promise of more to come”.

Recently, the VDMA has launched a new Working Group on additive manufacturing to cover this emerging field that employs photonics for laser-assisted sintering and melting. The technique’s development from rapid prototyping to economical batch production of high-quality components has already commenced, and its relevance to machinery and plant engineering is evident. It now constitutes an opportunity for targeted “cross-fertilization”, for example, in medical engineering, such as for implants and prosthetics.

Lasers: The global laser industry, strong in many areas but still evolving, is set to grow another 5 per cent to $9.2 billion in 2014. That was the headline conclusion from market analyst Allen Nogee, senior analyst at publisher Pennwell and a keynote presenter at February’s Lasers & Photonics Marketplace Seminar in San Francisco.

Coinciding with what turned out to be a buoyant Photonics West expo held in the same city, the day-long seminar included talks on the hot topics of 3D printing and high-power fiber lasers, as well as the wider overview from Nogee. Strategies Unlimited’s overall laser market forecast for 2014 sees total sales hitting $9.2 billion, up from $8.8 billion in 2013.

Other laser-hungry technologies now taking off include head-up displays and home projection systems. Growth in this area would be around 15% in 2014 and a further 10% in 2015, pushing towards $250 million. Nogee stressed the importance of sensing applications for lasers, whether for spectroscopy, homeland security, oil and gas or retail. Together, these markets should grow at about 8 per cent per year to reach $700 million by 2015. 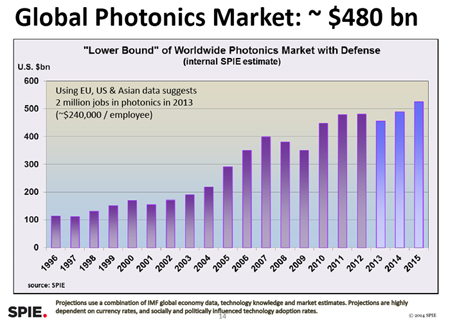 Photonics: Further evidence for the growth and potential has come from European association Photonics 21 which last year predicted in its multiannual strategic roadmap that the photonics market would be worth €480 billion in 2015.

Meanwhile SPIE, the international society for optics and photonics, which owns optics.org, assessed 2013 global sales of photonics systems to be around $450 billion, growing to $480 billion in 2014 and heading above $500 billion by next year.