Revenues of $294 million in the latest period represented the company’s sixth consecutive quarter of growth. 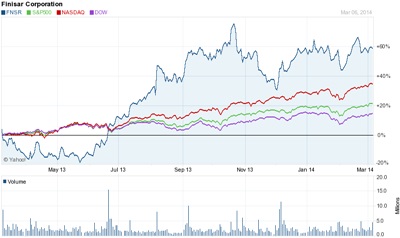 Sales inched up only 1 per cent sequentially for the three months that ended on January 26, but the figure represented a 23.4 per cent increase on the equivalent period last year.

During that time, the Sunnyvale, California, company’s progress has been reflected in a soaring stock price, which prior to the latest results announcement had already increased 60 per cent – outstripping all three of the major stock indices in the US despite their own resurgence. It rose another 3.5 per cent in early trading following the latest update.

With operating margins holding steady, the company was able to post a net profit of $27.1 million while still spending heavily on the construction of a new production site in Wuxi, China.

u2t strategy
Sales in the current quarter are expected to grow again, and that will be thanks partly to additional revenues from Finisar’s recent acquisition of the Fraunhofer spin-out company u2t Photonics, which specializes in high-speed receivers and detector components based on indium phosphide semiconductors.

Finisar’s executive chairman and former CEO Jerry Rawls describes the u2t deal, completed on January 31 for around $20 million in cash, as “strategically important”, and Finisar will take on the German firm’s net debt of $7 million while seeking to improve operating margins.

The company plans to combine u2t’s receiver, photodiode and new modulator technologies with its own narrow-linewidth tunable lasers, to provide a full range of optical components and vertically integrated modules for the emerging 100 Gb/s coherent metro and long-haul optical communication markets.

Quoting figures from analyst company Lightcounting, Rawls told investors that the market for 100G coherent transceivers is expected to be worth $500 million by 2017.

In the current quarter, the company expects sales revenues of between $290 million and $305 million - not including any potential additions from u2t, which is believed to have posted sales of around $33 million in calendar 2013.

“We expect revenue to grow for the seventh consecutive quarter and to, again, set new company records,” concluded Rawls.