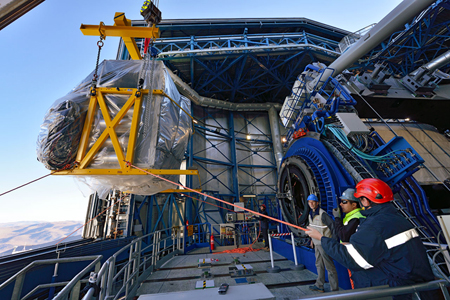 Roland Bacon, team and principal investigator for the instrument, who is from the Centre de Recherche Astrophysique de Lyon, France, commented, “This seven-tonne collection of optics, mechanics and electronics is now a fantastic time machine for probing the early Universe. We are very proud of this achievement and MUSE will remain a unique instrument for years to come.”

The scientific objectives of MUSE include probing the mechanisms of galaxy formation and studying both the motion of material in nearby galaxies and their chemical properties. Other applications will include studies of the planets and satellites in the Solar System, the properties of star-forming regions in the Milky Way, to distant areas of the Universe. 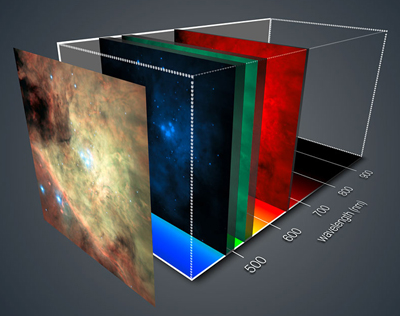 Component views that build up image of the Orion Nebula.

MUSE couples the discovery potential of an imaging device with the measuring capabilities of a spectrograph, while taking advantage of the much better image sharpness provided by adaptive optics. The instrument is mounted on Unit Telescope 4 of the VLT, which is currently being converted into a fully adaptive telescope.

MUSE employs 24 spectrographs to separate collected light into its component colors to create both images and spectra of selected regions of the sky. It creates 3D views of the Universe with a spectrum for each pixel as the third dimension – in a technique known as integral field spectroscopy.

This allows astronomers to simultaneously study the properties of different parts of an object such as a galaxy to see how it is rotating and to measure its mass. It also allows chemical composition and other physical properties to be determined in different parts. During the subsequent analysis, an astronomer can move through the data and study different views of the object at different wavelengths, like tuning a television to different channels at different frequencies. 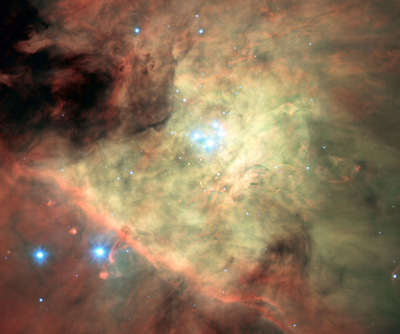 The assembled MUSE image of the Orion Nebula.

Bacon added, “This technique has been used for many years but now with MUSE it has achieved a leap in sensitivity, efficiency and resolution. One way of describing this, is that MUSE simultaneously combines high-resolution imaging with spectroscopy.”

Since the start of 2014, Bacon and the MUSE team at Paranal have recorded the MUSE story in a blog. The team will present the first results from MUSE at the forthcoming 3D 2014 workshop at ESO in Garching bei München, Germany, between March 10-14, 2014 (next week).