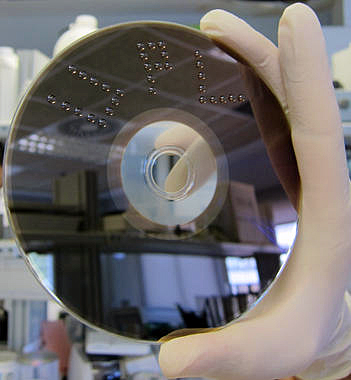 Worth watching: Samples deposited on the Blu-ray disc.

Besides storing vast volumes of data, optical discs can be adapted to detect microorganisms, toxins, allergens and tumoral biomarkers. A novel adaptation of Blu-ray technology is enabling researchers at the Polytechnic University of Valencia (PUV), Spain, to discover if a sample contains Salmonella or other toxic substances. This simple and cheap analytical system can be applied to clinical diagnosis and environmental monitoring.

A system devised by chemists at PUV uses Blu-ray discs and players to detect pathogenic bacteria and toxins in biological samples. The work has recently been published in Biosensors and Bioelectronics.

Sergi Morais, associate principal investigator, commented, “We use the surface of these commercial discs as a platform for analysis to carry out the tests and then, with the laser reader of the recorder/player we can identify the bacteria and determine their concentration.”

The Valencia team has analyzed the DNA of two types of pathogenic bacteria: Salmonella typhimurium, which causes salmonellosis, and Cronobacter sakazakii, an intestinal parasite. “The method could detect these and other microorganisms in breast milk or other foods,” said Morais. The researchers also applied Blu-ray technology to determine the concentration of microcystins in water, a type of toxin that causes gastrointestinal disorders or allergic reactions, and which are produced by cyanobacteria.

“This type of test can also be used to detect tumoral biomarkers, food and drug allergens, and pesticides in water, for example. The level of pollutants in water and air are regulated by directives that set a maximum residue limit, and the sensitivity of our technique allows analyte levels below those required by government standards to be detected.”

The samples are deposited in small quantities on the disc surface in the form of microarrays or two-dimensional arrays. “The hydrophobic nature of the surface of the Blu-ray disc allows the proteins to be locked in place by passive adsorption in a high-density format of 64 points in each 1 mm2 drop,” researcher Ángel Maquieira, added.

“On the 90 cm2 surface of a Blu-ray discs it is possible to imprint 138,000 points, each one 125 µm in diameter,” he added. “Furthermore, the low sample volume used (5-10 microlitres) and the low cost of the developed hardware make this technology a very practical and economically competitive tool.”

The accuracy and sensitivity of these electronic devices is similar to that obtained with conventional laboratory techniques, such as the quantitative polymerase chain reaction (PCR). Though it’s not an “official” methodology, the process offers a very practical strategy to eliminate samples before applying more exhaustive analytical techniques. “Samples that are shown to be positive by this methodology will also be positive using the other techniques,” Morais explains.

Its characteristics make Blu-ray technology a promising alternative due the fact it may be applied to the development of new systems of analysis used in clinical diagnosis, or be used in situ, in the field, in the agro food industry, and in environmental monitoring. The study also notes that the lack of simple sensor systems that combine a high detection resolution with low costs is the reason why some analytical technologies are not found in installations with a low budget.

In an interview with optics.org, Morais explained: “We pick the signal from the Blu-ray player and transform the analogue information into a digital image. Then we use our software to analyze the image. Essentially, we are using an ordinary Blu-ray player. The only thing that we have added is an electronic data acquisition board to take the information from the reflected signal and convert it into a digital image.

“After scanning the whole surface of the disc you get different files on the different areas of the disc. Then these images are analyzed. Our team has been working with this type of technology for 10 years. We started working with regular CDs then DVDs. Then we realized that Blu-ray was even more sensitive than the previous formats.”

PUV is now working on several different projects with a number of Spanish enterprises in the fields of animal health, in vitro testing for allergies, with food companies to develop a technique for testing for gluten and other food allergens, and with a company in Barcelona for the detection of polymers in pharamco-genetic applications.

Morais concluded, “Public funding is quite difficult for these developments, so that is why we are working with several companies and we are also trying to get some European project funding. Our ultimate goal is to transfer our technology to these types of companies.”