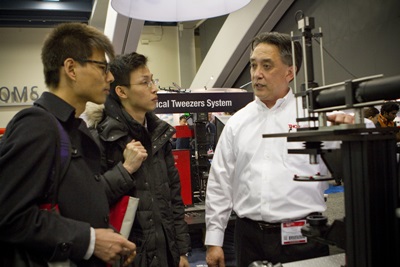 Thorlabs, the diversified provider of photonics components and systems, is to open a new business unit dedicated to ultrafast optoelectronics in Ann Arbor, Michigan.

The company, whose US headquarters are in Newton, New Jersey, says that “Thorlabs-UFO”, as it will be known, will focus on addressing the need for high-speed optoelectronic products with bandwidths up to 100 GHz for non-telecommunications applications.

Those products are set to range from basic components to subsystems and instrumentation, with the company looking for guidance from its customers in terms of specific product development.

Janis Valdmanis, who has been appointed general manager of the new operation, said:

“Ultimately, our research and development efforts here at Thorlabs Ultrafast Optoelectronics will also serve to complement and advance Thorlabs’ other initiatives in ultrafast and high-power lasers, optical and fiber-optic instrumentation, and life science products.”

Start-up incubation
The Ann Arbor location places Thorlabs-UFO in the heart of Michigan’s high-tech region and in the same city as the University of Michigan’s highly influential Center for Ultrafast Optical Science (CUOS).

CUOS has been a pioneering force in ultrafast research for more than twenty years and is regarded as a world-leading center of excellence in the field. During that time, it has also incubated spin-off companies including the scientific laser specialist Clark-MXR and Intralase, which was instrumental in the development of precision corrective laser eye surgery.

The center enjoys very close links with the ultrafast fiber laser company IMRA America, which also has its headquarters in Ann Arbor.

“There is a long tradition of successful photonics-related research activity going on right here at the University of Michigan and other Michigan-based industrial and educational institutions,” added Valdmanis. “We hope to promote a strong interaction with that research community and attract strong talent from those channels in the coming years, contributing to Michigan’s overall job growth.”

Michigan is also home to the “M-Light” photonics cluster set up a year ago and which now comprises some 30 members. They include some of the industry’s biggest names, for example Trumpf, IPG Photonics and Fraunhofer USA, as well as defense giant L-3 Communications' “EOTech” electro-optics subsidiary.