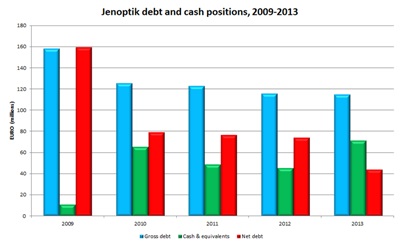 Shares in Jenoptik are trading close to decade-long highs after the Germany-headquartered photonics company confirmed its expectations of solid growth this year.

Publishing its annual report for fiscal year 2013, Jenoptik said that it would propose another increase in shareholder dividends to €0.20 per share – a move that provided investors with another boost as the Jenoptik stock price rose 5 per cent.

Trading at €12.65 on March 25, the company’s stock has retained the strong gains made since hitting a low of just €3 in summer 2009. Aside from a couple of recent spikes above €13, the current level represents a valuation not seen since 2002.

In the annual report, CEO Michael Mertin highlighted the progress made in what remains a challenging market – particularly in Europe – as group revenues topped €600 million for the first time.

Mertin added: “At the same time, our capital expenditure allowed us to put in place the conditions for further profitable growth.”

The combination of particularly strong cash generation in the closing quarter of the year and payments made to the so-called “silent” shareholders who invested in real estate ventures set up by Jenoptik previously has also delivered a sharp decrease in the company’s net debt position (see figure above).

Standing at €44.1 million as of December 31, 2013, the net debt on Jenoptik’s balance sheet was down sharply from €74.5 million a year earlier, and now shows a dramatic reduction from the level of €159.5 million amid the global financial crisis of 2009. 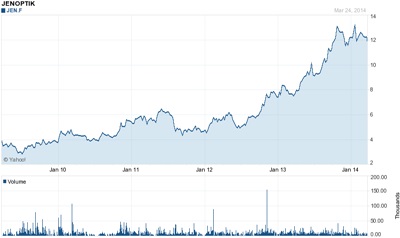 Laser and optics optimism
Jenoptik’s lasers and optical systems business segment contributed the largest single chunk of revenues within the group, as the division’s sales rose nearly 6 per cent on 2012 to reach €224.7 million.

The company noted particularly strong growth in the field of micro-optics used in semiconductor equipment and flat-panel displays, as well as for optoelectronic systems used in healthcare – such as the new OEM JenLas D2 modules for ophthalmology applications.

Jenoptik said that healthcare and life sciences were gaining in importance after it secured more “international key customers” with its new systems, and the company’s sales figures for 2013 confirmed that as medical technology revenues jumped from €31.9 million in 2012 to €39.3 million last year.

And while the laser and optical systems division’s capital expenditure dropped in 2013 following the completion of the firm’s new laser diode manufacturing facility in Berlin-Adlershof during 2012, last year did see significant investments in both Jena and Dresden related to micro-optics production.

For the remainder of this year, Jenoptik said it was expecting “restrained but stable” demand from the semiconductor capital equipment market, and that its lasers division would concentrate on the emerging areas of 3D metals processing and welding of plastics, as well as more established markets.

Overall, the additional demand from the semiconductor and health care market sectors should see the lasers and optical systems division grow its revenues by around 10 per cent in 2014, to just below €250 million.

For 2015, the company now says that its expects a further “marked rise” in divisional sales from the lasers and optical systems segment.