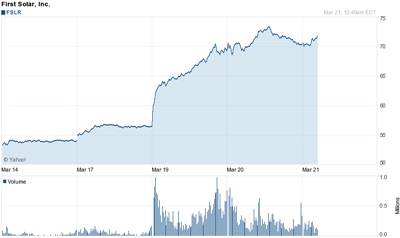 On the up: First Solar's stock price

Shares in the photovoltaic cell, module and system provider First Solar have soared in value after the US-headquartered company’s executive team issued an optimistic outlook through 2017.

Having climbed 20 per cent to around $70 during the company’s annual analyst day, First Solar’s stock now stands at a two-year high. And while that valuation remains a far cry from the heady days of 2008, when the stock briefly tipped $300, investors were perhaps surprised by a combination of positive financial guidance and a more optimistic technological outlook.

In his presentation, CTO Raffi Garabedian supplemented the recent announcement of a record 20.4 per cent efficiency small-scale cadmium telluride cell with news of a 17 per cent efficient module.

Those technologies will not be in mass production for some time, but the progress has prompted Garabedian and his team to accelerate the company’s roadmap towards the production of CdTe modules operating at 20 per cent efficiency some time in 2017 – a significant shift north of the CTO’s prior 17.2 per cent target.

Meanwhile the cost of the electrical power generated by First Solar’s modules continues to fall, reaching $0.63 per Watt across fiscal year 2013. That is a slightly faster decline than the company had anticipated, and means that the full system cost has now fallen to $1.59.

The key question for First Solar is whether its improvements to cell and module efficiencies will enable it to keep reducing the cost-per-Watt figure in line with the crystalline silicon alternatives being manufactured by the largely Chinese competition.

TetraSun targets year-end
By the end of this year, First Solar should in fact have its own silicon-based modules on sale. Plans to commercialize the technology acquired through the purchase of start-up TetraSun a year ago should come to fruition in late 2014, with a pilot line currently under construction in Malaysia.

Production tools for that line have been ordered and should be installed and qualified by the final quarter of this year, First Solar said. Manufacturing is slated to begin shortly afterwards, with a Japanese customer set to take delivery of 60-cell modules from TetraSun that should each be capable of producing 300 W. Last year, Garabedian said that TetraSun’s technology should support a module production cost of around $0.60 per Watt once in production.

Those TetraSun modules should give First Solar an additional string to its bow as it looks to target rooftop and restricted-space applications of PV, something that its CdTe technology is not really suited to. At the moment, the vast majority of its business comes from utility-scale deployments of the thin-film modules.

For that utility sector, work with engineering giant GE has resulted in a new “power plant” module design that combines much larger solar arrays with each single inverter, meaning that far fewer inverters are required overall in large-scale deployments.

The 4 MW ProSolar 1500V station is said to be the largest inverter in the industry capable of accommodating 1500 V DC solar arrays, and a key factor in terms of delivering economies of scale for utility PV plants.

While all of those developments would have been welcomed by investors, what is likely to have really prompted the share-price hike was a financial outlook including targets as far out as 2016 that suggested rising profits.

Sales are likely to reach close to $4 billion this year thanks largely to the legacy of PV plants already under construction, and remain at that level while profitability improves markedly during 2015.