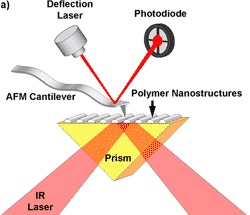 Alexandre Dazzi, a professor at the Laboratoire de Chimie Physique at the Université Paris-Sud in France has won the New York Microscopical Society’s Ernst Abbe Memorial Award for 2014.

The researcher, who is credited with inventing the combined atomic force microscopy-infrared (AFM-IR) technique subsequently commercialized by California-based Anasys Instruments, follows in the footsteps of past winners Albert Crew, the inventor of scanning electron transmission microscopy, Polaroid photography pioneer Edwin Land, and Gerd Binning and Heinrich Rohrer, the inventors of AFM.

Anasys, which announced the selection of Dazzi on its web site, says that the award will be presented at a special Abbe Award Symposium taking place November 17-19 in Somerset, New Jersey.

At the event, Dazzi will present a paper on his work at a session chaired by John Reffner, a professor of forensic science at John Jay College, CUNY.

Dazzi’s research, which is based on the coupling between AFM and an infrared source that can be tuned to characteristic molecular vibrational frequencies, has since been commercialized by Anasys, in the form of its “nanoIR” products.

This coupling allows ultra-local infrared spectroscopy and chemical mapping on the nanometer scale, and is based on detecting the local thermal expansion of a sample when it is irradiated at the wavelength corresponding to its absorption bands. The tiny expansion can be detected by the AFM tip when in contact mode.

The technique allows a combination of excellent lateral resolution from the AFM tip with the chemical specificity of light absorption in the mid-infrared spectral range, and has subsequently been used to chemically map a single bacterium of E. coli, with a sub-diffraction-limited precision of just 50 nm.

Anasys CTO Craig Prater says: "We are delighted that Alex's groundbreaking innovation is being recognized by this prestigious honor. We frequently hear from customers and collaborators that AFM-IR allows them to perform measurements they can't achieve with any other technique." 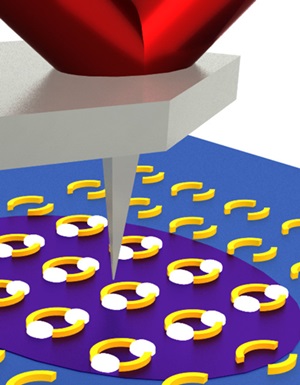 Resonant oscillations
In the Anasys AFM-IR equipment, now in its second generation, either a quantum cascade laser (QCL) or optical parametric oscillator (OPO) source is used. The QCL gives a narrower linewidth, while the OPO covers a broader spectral range.

Samples are mounted on top of a ZnSe prism, and are illuminated by total internal reflection of the infrared laser. As the sample absorbs the radiation, it heats up, leading to rapid thermal expansion that excites resonant oscillations of the cantilever. The induced oscillations decay in a characteristic “ringdown” signature that can be analyzed with Fourier techniques.

The spatial resolution that is possible with the combination technique depends on the thermal and mechanical properties of the sample being analysed, although Anasys says that measurements smaller than 100 nm are “routine”.

Recent applications of the technique include the identification of microbes suited to biofuel production, and the characterization of new types of metal-organic catalysts by scientists at the US National Institute of Standards and Technology (NIST).

Along with Otto Schott and Carl Zeiss, the German physicist Ernst Abbe is credited with pioneering the field of optics during the second half of the nineteenth century. He is perhaps best known for discovering and defining experimentally the practical resolution limit of a microscope – although that limit has in recent years been beaten with some innovative techniques.