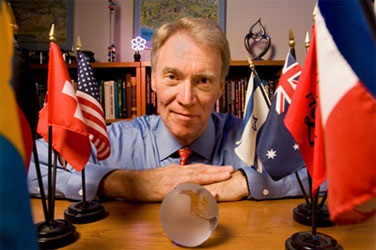 Recognising what the international optics and photonics society described as seminal contributions, Harrington’s work has led to the development of infrared transmissive fiber optics and related applications in laser power delivery, chemical and thermal sensing, and spectroscopy.

His research has resulted in real-world laser applications in surgical and industrial settings, with highlights including the invention of the hollow glass waveguide (HGW). Created at Rutgers by Harrington and his students, it is said to be one of the university’s most actively licensed technologies.

Such waveguides deliver infrared laser power and are used in fiber links for spectroscopic and thermometric applications. Harrington is also cited as inventing the hollow sapphire and alumina waveguides, now used today in laser surgery.

"Difficult" areas
Harrington's forays into the commercial world have included a stint as director of infrared fiber operations at Heraeus LaserSonics, where he oversaw research and development of fiber-optics for delivering infrared laser power in surgical applications.

“M.J.” Soileau, now VP for research and commercialization at the University of Central Florida (UCF), a previous winner of SPIE’s Gold Medal and the first director of UCF’s renowned Center for Research and Education in Optics and Lasers (CREOL), said of Harrington:

“His scientific career has been focused on the very difficult, and often unrecognized, area of optical materials for the infrared. His work in that arena has been a major factor in the successful application of infrared lasers to medicine and national defense.”

Harrington also served as the president of SPIE President back in 2002. He currently serves as treasurer at the International Commission for Optics and has also been a science advisor in the Bureau of International Security and Nonproliferation, where he helped establish controls for dual-use high technology goods including lasers and detectors.

SPIE’s Gold Medal is the society’s highest honor, and has been awarded since 1977 in recognition of outstanding engineering or scientific accomplishments in optics, electro-optics, or photographic technologies or applications. Past winners include Harvard’s Federico Capasso, co-inventor of the quantum cascade laser, thin-film expert Angus MacLeod and laser pioneer Charles Townes.

The Gold Medal is just one of 13 awards announced by SPIE, which is also the publisher of optics.org. The full list reads: