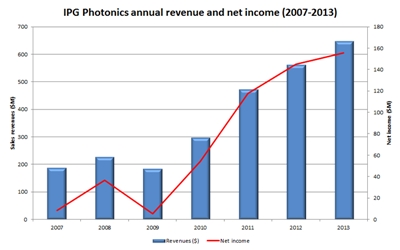 Fiber laser firm IPG Photonics has delivered another strong increase in annual sales, with the Massachusetts company now hopeful of growing its influence as a systems provider and of benefiting from the adoption of 3D printing technology.

IPG posted revenues of $648 million for fiscal year 2013, up 15 per cent on the 2012 figure as the rapid adoption of its fiber lasers in materials processing applications continued.

And while that might represent a slightly slower rate of growth than the past three years, the company appears set to grow on multiple fronts after heavy recent investment in research and development spawned a raft of new lasers launched at the Photonics West exhibition.

Founder and CEO Valentin Gapontsev told an investor call to discuss the latest developments: “We grew our bottom line by 7 per cent even as we invested heavily in research and development and fixed assets. These results demonstrate that IPG continues to extend its competitive lead while capitalizing on the growing demand for fiber laser technology.”

He added: “The most impressive sales growth was for our kilowatt-class fiber lasers. During 2013 we increased the production volume of lasers [emitting] more than 500 watts by 55 per cent. These are very exciting numbers."

With a much stronger backlog compared with the start of last year ($265 million, up from $203 million), Gapontsev is confident that the level of demand in the traditional application areas of laser materials processing such as welding, cutting and cladding will continue to drive sales growth in 2014.

3D printing traction
But the CEO also picked out the hot-topic theme of 3D printing as an area to watch for IPG. More specifically referring to additive manufacturing of metal parts that - unlike the majority of “3D printing” applications - relies on lasers, Gapontsev said:

“We believe there are meaningful opportunities for us. IPG started to supply fiber lasers for this market many years ago, and now, with the market starting to boom, our sales are growing fast. Only during the last three months we received two new multimillion dollar orders from leading players in Europe and Asia.”

Responding to investor queries, IPG’s CFO Tim Mammen said that additive manufacturing applications amounted to only about $10 million in sales during 2013 – barely one per cent of IPG’s total – but that this figure was up around 50 per cent on 2012. “Just about all of the major players [in 3D printing] purchase IPG lasers,” he said.

With one “very large” order already in place this year, Gapontsev said that, as in other applications, a key trend in 3D printing is that manufacturing companies who were previously using sub-kilowatt lasers were now scaling up with orders for multi-kilowatt sources to make larger parts or hike production speeds. 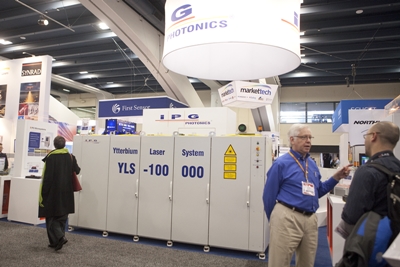 New lasers launched
Following up on the launch of no fewer than seven new families of laser products at Photonics West a fortnight ago, the CEO described the response from the industry as “huge”, in particular for ultraviolet, green and ultrafast sources.

Another new product, the “ECO” family of high-efficiency kilowatt lasers, has been launched with the aim of reducing running costs for customers. And although these sources come with a higher price tag, rises in energy prices in Japan in particular should make them attractive.

IPG suggested that this was already beginning to happen, with new orders from “top-tier” auto makers in Japan, Europe and China featuring in the company’s most recent quarter.

The company also appears to be enjoying some success with its strategic move up the value chain and into laser materials processing systems – despite some initial investor concerns that this may lead it into competition with some of its own customers.

Gapontsev said that systems sales topped $20 million in 2013, with IPG’s “laser seam steppers” now shipping in volume. “It is now gaining wider traction as a replacement for resistance spot welding,” the CEO said. The laser welding system, which features an integrated clamping and safety enclosure, is already being used by several major auto manufacturers, he said, and also beginning to find adoption in the rail, agricultural equipment and consumer appliance industries. 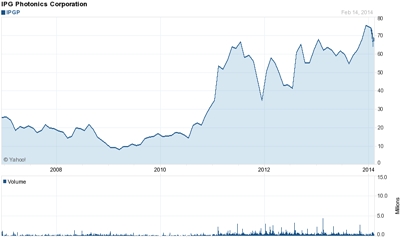 Russia targeted
IPG is enjoying the strongest traction for its systems in Russia, and has already delivered a recent order valued at just under $8 million. “It caused a huge interest in Russian industry and opens the door for a large market,” said Gapontsev. “As a result, now the system backlog is the fastest growing in our portfolio.”

He is expecting systems revenues to jump by more than 300 per cent this year, a rate of growth that would equate to fiscal 2014 sales of around $80 million.

Recent figures from the analyst company Strategies Unlimited confirm the continuing shift towards fiber lasers during 2013. The sources accounted for $787 million out of a total $2.4 billion sold last year for materials processing applications, said Allen Nogee at the recent Laser and Photonics Marketplace Seminar held in San Francisco.

While competitors such as Rofin-Sinar, JDSU and a new Trumpf/IMRA alliance will attempt to challenge in the fiber laser space, IPG looks certain to continue dominating the scene for the foreseeable future.