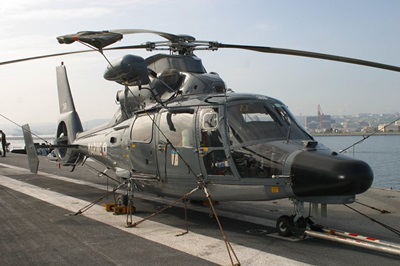 The system, previously developed through a series of small business innovation awards, employs laser Doppler velocimetry, a variant of lidar.

By measuring the wavelength shift induced by the scattering effect of natural particulates like ash and sand in the air, the technique is said to be able to deliver accurate airspeed information in three axes at low and even negative airspeeds. “This range of capability is not possible with pitot tubes, the longstanding industry standard for airspeed sensors,” points out Airbus.

AF447 pitot tube problems
Problems with pitot tubes during severe turbulence over the Atlantic Ocean are thought to have been a contributing factor in the crash of Air France flight 447 in June 2009, which involved an Airbus A330 aircraft.

The laser sensor system was installed on board an Airbus Dauphin 6542 helicopter for a series of flight tests conducted in Marignane, France by the company. “With the successful completion of these tests, the stage is now set for Airbus Group to work with OADS for certification, with the ultimate goal being commercialization aboard rotary wing aircraft,” it said.

In a company statement the Airbus CEO Allan McArtor said: “We are very impressed by the system's performance during flight tests and believe this technology can offer significant performance improvements in changing the way we design and operate aircraft in the future due to the accuracy and timeliness of the information.”

“This technology reflects our corporate commitment to advancing innovative technologies to benefit the aviation industry and represents a dramatic evolution for flight control systems," he added.

No icing impact
Airbus says that the OADS system can measure airspeeds as low as 20 knots, to an accuracy of better than 2 knots over the entire flight. In comparison, standard pitot tubes do not work below airspeeds of around 30 knots.

In addition, it is able to monitor the air 50-60 meters away from the aircraft. “This factor is especially significant in rotary wing applications, where airspeed measurements may be affected by the downwash effect,” Airbus says.

But as well as measuring airspeed around an aircraft, the OADS technology is also able to monitor wind and turbulence several thousand feet above and below – in principle providing pilots with the ability to select the most favorable altitude for a flight, saving fuel and offering a smoother ride.

As a result, Airbus says that its executives are examining the technology's capability in collecting wind data for “tactical en route and strategic flight planning over extended periods of time”.

Another important factor is that the optical system is not affected by icing - a dangerous condition during which ice can form in the sensor openings of pitot tubes, blocking their ability to accurately measure airspeed. That has been suggested as the reason for the sensor problems that were experienced by Air France flight 447.

"We've just scratched the surface in exploring the operational efficiencies that this technology can potentially enable," concluded McArtor.