Delay to defense-related project will hit 2014 sales total, ahead of a sharp uptick. 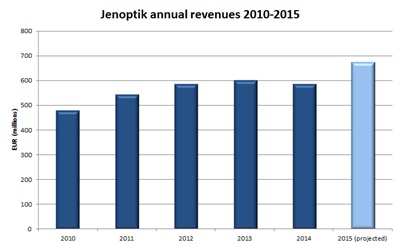 Jenoptik says that it is confident of posting a substantial increase in sales next year, despite a delayed project that will hit the German company’s revenues in the short term.

The Jena-based photonics firm has just reduced its financial sales guidance for fiscal 2014 to between €580 million and €590 million. It said: “A major international project for defense technology originally scheduled for 2014 will no longer be commissioned this year. The order intake, together with the project’s revenue generation, are shifted to the fiscal year 2015.”

Initially, Jenoptik had expected to post sales of around €630 million this year. But in October that was revised down to €600 million – close to the 2013 total – because of sluggish industrial demand and the impact of more stringent regulations on exports to Russia.

Although the latest update means that the company is set to report a year-on-year decrease in sales, the delayed order, along with the recent acquisition of UK-based traffic technology specialist Vysionics, should help to deliver a sharp uptick in revenues next year. “The Jenoptik Group is confident of its prospects in the 2015 fiscal year,” announced the firm. “Group revenue is expected to come in at between €650 million and €690 million in the next fiscal year.”

Strong earnings are also expected, with “above average” growth in the key EBITDA (earnings before interest, taxes, depreciation, and amortization) profitability metric.

CEO Michael Mertin, who was recently re-elected as the president of the Photonics21 industrial association in Europe, said in a company statement: “2015 will see our return to successful growth; we expect substantial improvements in revenue and earnings.”

Citing a strong order backlog in all three business segments – lasers and optical systems, metrology, and defense – Mertin added: “Customer feedback is also consistently positive and we are seeing growth momentum in our markets. Additional benefits will come from our activities in the focus regions of Asia and America. Furthermore, we will continue to seek value-adding acquisitions which boost our core business and extend our global presence.”

Jenoptik is set to file its preliminary financial results for the 2014 fiscal year on January 29.