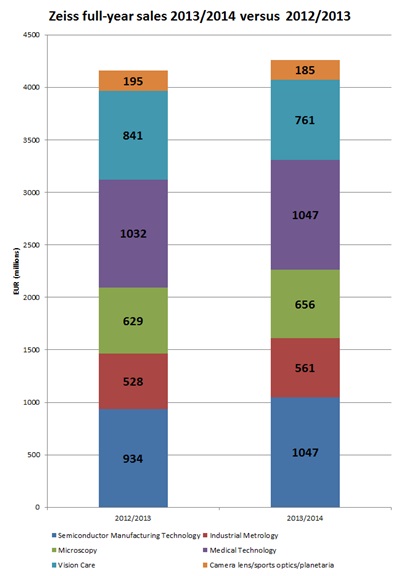 Optics giant Zeiss has posted solid increases in both revenue and orders for its latest financial year, with demand for lithography equipment and microscopy tools helping it to ride out the weak global economy.

At €4.29 billion, sales for the year ending September 30 were up 2 per cent on the prior year – but that figure actually represents a 5 per cent increase after currency effects are taken into account.

Similarly, currency-adjusted orders rose by 7 per cent to €4.27 billion, while earnings before interest and taxes (EBIT) jumped 14 per cent to €360 million.

CEO Michael Kaschke said in a company release: "Thanks to our broad portfolio we have remained on track to further growth despite the difficult conditions confronting us in the global economy. However, the business groups developed differently and did not meet our expectations in all cases."

The brightest spot for Zeiss turned out to be the notoriously volatile semiconductor sector, where sales rose by 12 per cent to €1.05 billion on strong demand for lithography equipment – particularly in the first half of the year.

That sales total was matched by the group’s medical technology unit, which posted a 5 per cent currency-adjusted increase in revenues. Also performing well was the Zeiss microscopy unit, where sales of €656 million were up 7 per cent after the currency adjustment.

Microscopy unit needs “sharpening”
Faring less well was the company’s “vision care” spectacles unit, where sales decreased 6 per cent to €761 million, while consumer optics – including the well-known ranges of camera lenses and binoculars but actually Zeiss' smallest business division by far – dropped 3 per cent to €185 million.

“The revenue trend in the consumer optics business group fell short of expectations,” admitted Zeiss, adding that although microscopy sales had been strong, the business group's profitability did not meet internal targets. “As a result, a comprehensive program aimed at sharpening its competitiveness was launched in the new 2014/15 fiscal year,” said the firm.

That relates to the company's recent decision to shed 300 jobs from the microscopy unit worldwide, part of a bid to cut costs by a "nine-digit sum" in the medium term. However, the majority of the cost savings should be met through improved purchasing and inventory management - Zeiss told optics.org that no product lines would be affected by the measures.

Looking ahead, Zeiss is maintaining its historically strong level of spending on research and development - €448 million, equivalent to 10.5 per cent of sales in fiscal 2013/14 – and is confident of further growth in the coming 12 months despite the widening economic uncertainty highlighted by the plunging price of oil and its impact on Russia.

“The stagnation or slowdown currently emerging in the world economy poses new challenges to the company,” Zeiss reported. "Fiscal year 2014/15 will not be an easy one.” Nevertheless, the firm expects to post an increase in both its revenues and EBIT figures this time next year.

Kaschke said: "We will reach this ambitious goal because we will continue to improve our productivity and efficiency and, at the same time, spare no effort to focus even more sharply on the needs of our customers."