Considering the "double record" at this year's Vision 2014 - numbers of exhibitors and visitors both up on 2012- Thomas Walter, Manager of Industrial Solutions Department at Messe Stuttgart commented, "Our expectations were far exceeded." The 26th edition of Vision produced not only a record number of exhibitors (432) with a high number of foreign exhibitors (54% / 2012: 37, up 49%) but also a record number of visitors. Over 8,700 trade visitors attended, equivalent to a growth of around 25% over 2012. "There was also a rise in international visitor interest," Walter added.

The latest show success was attributed to its new two-year frequency. Olaf Munkelt, Chairman of the VDMA Machine Vision Group in Frankfurt and MD of MVTec Software, added, "We are pleased with the number and quality of trade visitors. We have received positive feedback from all branches of the industry. The longer break between shows enabled exhibitors to develop better presentations of their innovations. Exhibitors this year came from 31 nations – all types of company were represented, ranging from start-ups to major players. And for the first time, there was a new focus on industrial PCs and embedded PC systems, which are suited for complex, demanding machine vision applications." 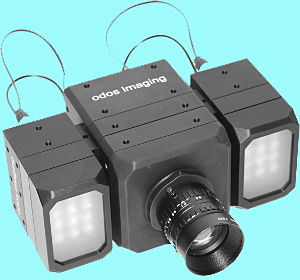 Chris Yates, CEO Odos Imaging, said, “We are absolutely delighted and honoured, to receive the Vision Award 2014, particularly since so many outstanding products and companies were nominated. We believe our 3D vision systems represent a new direction for the machine vision industry, seeking to provide high-resolution 3D imaging with the same ease of use as conventional industrial cameras."

Founded in 2010 as a spin out from the Siemens Technology Accelerator and based in Edinburgh, Odos Imaging offers both complete systems and component technologies for use in logistics, industrial automation, agriculture and traffic systems.

optics.org presents below a selection of some of the key product and technology launches in Stuttgart. Organiser Messe Stuttgart said that this year 3D vision systems are leading the MV market place, exemplified by technologies such as panoramic imagers, CMOS cameras, 5D Time-of-Flight cameras and fast data interfaces. The innovations this year were mainly characterized by 3D machine vision solutions. There were also interesting developments with CMOS image sensors and cameras, the increasingly simple integration of systems using USB 3 Vision or CoaXPress interfaces. 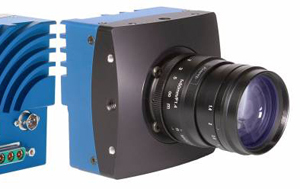 Mikrotron has released a new high-resolution, high-speed camera for applications ranging from inspections in the manufacture of flat screens and printed circuit boards to particle-based flow measurement and 3D measurements or surface inspection. The EoSens 25CXP is a compact, digital 25 megapixel (80 fps) CMOS camera. Christian Pilzer, president, said, "With a high-performance CoaXPress real time data interface and excellent performance features, it satisfies the high requirements of the high-end area."

Baumer presented its VisiLine camera series, which has been extended with the USB 3 vision interface. Camera models with Sony VGA and 1.2 megapixel CCD sensors, frame rates of up to 42 images/s are available. A fast VGA CMOS sensor achieves a higher frame rate of 373 images/s. 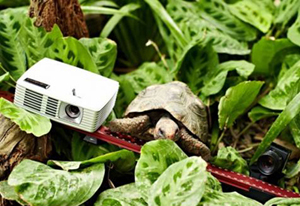 David Vision Systems presented its SLS-2 scanner. It works with structured light, which allows precise 3D scanning within seconds. The scanner’s modular structure enables flexible adaptation to the object size – from a coin to a couch in scale. The 3D model can also present color and texture on its screen.

The BoreInspection system, developed by the French manufacturer Mesure-Systems-3D, measures 3D bore holes, internal threads, band measurements, internal fine grooves, counterbores and even cylindrical objects. Complex parts with grooves, edges or beads can also be examined with the contactless 3D inspection system in the production line, assessing up to 50 characteristics. 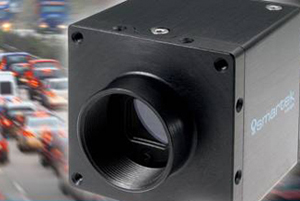 The automotive industry uses adhesive connections for the fully automated insertion of glass panes. The 360° inspection system from Isra Vision allows curved glue beads to be inspected with high precision. The integrator developed its Seamstar3D sensor head for this purpose. According to the manufacturer, the intelligent design makes it the world's first sensor with a 360° view. 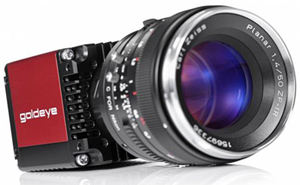 This development in the shortwave infrared camera marketplace features an InGaAs sensor, it is sensitive to infrared radiation between 900 and 1,700nm. It is thus suitable for demanding machine vision applications outside the visible spectrum.

Stemmer Imaging demonstrated the application of diverse machine vision technologies to surface inspection of strip products. Two line cameras from Teledyne Dalsa and JAI, a Contact Image Sensor (CIS) from Mitsubishi Electric, as well as a triangulation camera from Automation Technology, are elements of the demonstration system. All sensors work autonomously and detect different features of an aluminum plate, which moves on a linear bench. 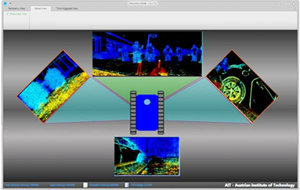 The Austrian Institute of Technology demonstrated its dynamic vision sensor, designed to improve the capabilities of mobile robots, for example in situation recognition, navigation or exploration applications. In combination with a rotating camera, the sensor is the centerpiece of a high dynamic range panoramic stereo camera, which enables the collection of 360° stereo panorama images in real time.

Bluetechnix’s next generation of sensor systems, suited to robot and automation applications or for counting people. The Argos3D-P320 is a depth sensor based on the time-of-flight principle. It is equipped with a smart depth sensor IC and a high-resolution 2D-CMOS sensor. The IC supplies depth information and grey values simultaneously for each individual pixel, while the integrated 2D-CMOS image sensor captures scenes with a resolution of up to 1080p. With active infrared light the sensor is able to supply 3D and 2D information.