Combination with Raman spectroscopy offers new insight into behavior of drugs on their way to the lung. 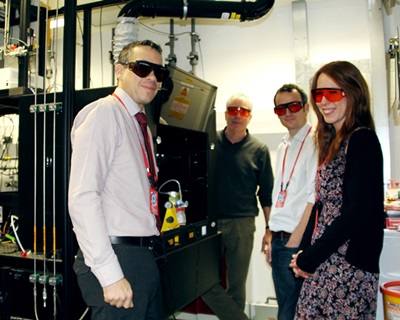 Asthma research team at the CLF

Scientists in the UK have combined two different optical techniques to test the effectiveness of asthma inhalers in a completely new way.

Using a laser beam trap to levitate tiny particles containing salbutamol – the active ingredient in inhalers that helps asthma sufferers to breathe more freely – and Raman spectroscopy to identify molecular changes while the particles are airborne, the UK team says that its findings could improve the effectiveness of inhalers in the future.

According to the World Health Organization, more than 235 million people suffer from the chronic disease, which narrows airways through bronchial inflammation. In rare cases, the condition can prove fatal.

By studying how the particles expelled by an inhaler behave when airborne, simulating the way that they enter the human respiratory tract and travel into the lungs, the new research promises better drug delivery systems.

Francis Pope from the University of Birmingham, who is the lead investigator on the work just published in the journal Chemical Communications, said:

“This research could lead to more efficient inhalers to deliver drugs for respiratory problems. Our results will also inform pharmaceutical companies who may be looking to improve the chemical structure of the drug, increasing effectiveness whilst reducing negative side effects.” 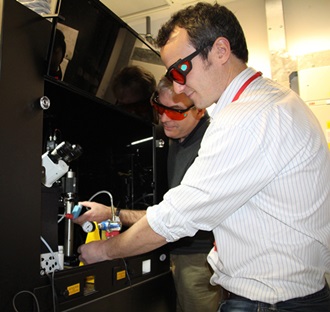 Octopus imaging facility
The study, which also involved researchers at Imperial College, London, and the University of Cambridge, relied on some of the UK’s most advanced lasers, housed at the Science and Technology Facilities Council’s Central Laser Facility (CLF) in Harwell.

Using the lasers to “levitate” the particles and suspend them in air, they then tested how the particles behaved under conditions modeled to simulate the human respiratory system.

According to the team, it is the first time that tests on such particles have been carried out in an environment that mimics their journey from inhaler to lung.

The CLF’s Andy Ward explained: “We captured each particle by trapping it between two focused laser beams, and then tested its behavior in different temperatures and levels of humidity.

“Our tests show how water is adsorbed, by following changes in chemical bond vibrations. Usually such tests are done on a glass slide so this is the first time the particles have been tested while airborne, as they would be when traveling through the respiratory tract.”

Fighting evolution
As Peter Seville, team member from the University of Birmingham’s School of Clinical and Experimental Medicine, points out, it difficult to get such particles into the lungs and be effective. “The human respiratory tract is anatomically evolved to prevent particles being inhaled,” he said.

“To overcome the natural defense mechanisms of the body, complex delivery devices and extremely small drug particles are required. These particles are typically 2-5 micron in diameter, making them approximately a tenth of the width of a human hair.”

Seville explains that any moisture that clings to the active drug particles as they travel from the inhaler to the lung will likely increase their size, and affect exactly where the drug will end up.

“It can result in the drug being deposited in a non-ideal site, giving rise to less effective treatment and potentially an increase in side effects,” he said.

In their experiments, the team discharged the inhaler into the laser trap, captured a microscopic particle in air and recorded its size, shape and – using Raman spectroscopy – its chemical signature to show evidence of any water adsorption.

Lead investigator Pope highlighted the importance of new optical trapping techniques, saying: “We would not have been able to do this work without the unique capability of these lasers to capture and levitate particles, providing a new way to test the performance of the inhalers.”

• Earlier this year Cobalt Systems, an STFC spin-out company that specializes in Raman spectroscopy systems, won the prestigious Royal Academy of Engineering MacRobert Award for technology that is now being used in airports to identify liquids inside sealed containers.