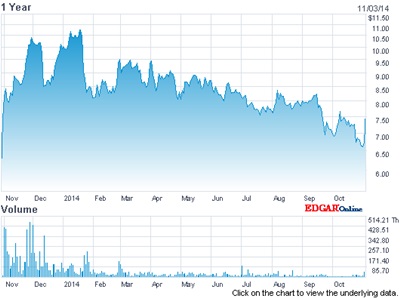 Iridex, the California-based developer of ophthalmic laser systems, has reported a 20 per cent increase in laser sales for its latest financial quarter, and says that a new system for treating the sight-threatening disease glaucoma will be a major focus next year.

The Mountain View company’s stock price rose nearly 15 per cent after CEO Will Moore announced a net income of $0.5 million on sales of $10.1 million for the three months that ended September 27 and expectations of an improved sales figure for the closing quarter of the year.

Beyond that, he is optimistic about the progress being shown with a new laser-based treatment option for the debilitating condition. The system is currently subject to a fast-tracked regulatory application in the US.

“Looking to 2015, glaucoma is expected to be a major focus for the company,” he said. “We are preparing to add to our offerings with an innovative family of glaucoma products – based on our Cyclo G6 glaucoma laser system.”

Moore added: “Data being generated by leading physicians who have been working with Iridex on this new system indicate that MicroPulse treatment can be an important new alternative for the millions of non-compliant glaucoma patients for whom drug-based treatments are failing, prior to invasive surgical procedures.”

Market opportunity
The CEO told an investor conference call that many physicians were dissatisfied with the treatment options currently available to glaucoma patients, in particular a high complication rate for a procedure known as a “trabeculectomy” – widely used to reduce intraocular pressure.

Describing an “enormous market opportunity” for its MicroPulse systems – which are based on modulated continuous-wave emission – Moore said that the product development teams at Iridex were gearing up for an introduction of the Cyclo G6 laser and a disposable probe in early 2015.

“The Cyclo G6 glaucoma laser is expected to be an important part of next [year’s] business, evolving to a more procedural base model. Our introduction of sophisticated single-use probes will result in higher revenue.”

Moore also reminded investors that despite being founded 25 years ago, Iridex remained a small company that was exposed to fluctuating sales cycles in the medical sector.

But the adoption of a slightly different business model in which ongoing sales of disposable probes following the initial sale of the laser system would be a bigger influence ought to help smooth out the traditional “lumpiness” of the company’s revenue generation, he said.

In response to one investor question, Moore estimated that more than 55 million people were affected by glaucoma worldwide – with thousands of physicians treating the disease.

With regulatory clearance from the Food & Drug Administration (FDA) expected in early December thanks to a special fast-track review, the Iridex team will first be focused on the US market. The UK’s National Health Service – already a key market for the company’s existing single-use probes – is likely to be another major target in the future.