Hamamatsu Photonics, a leading developer of photomultiplier tubes, imaging systems and opto-semiconductors, has reported a positive set of financial results for the fiscal year that ended September 30, 2014. But the Japan-headquartered company has greeted an almost 10% annual improvement in sales with some caution, warning of an uncertain global marketplace in 2015.

However despite the improved figures, the company, led by president and CEO Akira Hiruma, said it remained concerned about certain aspects of the international business landscape in 2015 due to several economic and geopolitical concerns.

The company’s financial summary of the wider business year 2013-2014 stated, “Japan’s economy as a whole maintained a gradual economic recovery trend. Investment in plant and equipment rose gradually as corporate earnings strengthened and the employment and income environment showed improvement as well, against the backdrop of various economic measures and the Bank of Japan’s monetary easing policy.

”On the other hand, the economic picture overseas has remained uncertain despite moves toward a recovery that could be seen in some areas, and factors leading to instability, including a slowdown in newly developing countries and geopolitical risks, lingered.”

Looking ahead to 2015, the company acknowledged “the ongoing recovery trend in corporate capital investment driven by improved domestic corporate earnings”, but warned that uncertain conditions overseas "create a situation under which we still cannot take an optimistic view. Under such conditions, we expect consolidated net sales for the next year of ¥118bn (€820m), up by 5.4%, and operating income of ¥23bn (€160m), up by 5.7%.”

Imaging devices and light sources benefited from the recovery in semiconductor plant and equipment investment in the industrial field, which boosted sales of xenon lamps for semiconductor inspection equipment and Hamamatsu’s Stealth Dicing Engine for high-speed silicon wafer dicing.

Opto-semiconductor devices Sales in the medical field of core silicon photodiodes were boosted by growth in foreign markets, while sales of flat panel sensors remained steady, centered on dental applications. Sales of image sensors for semiconductor inspection equipment rose significantly as well, and sales of opto-semiconductor devices in general increased strongly as sales expanded for products such as LEDs and Photo ICs for factory automation. 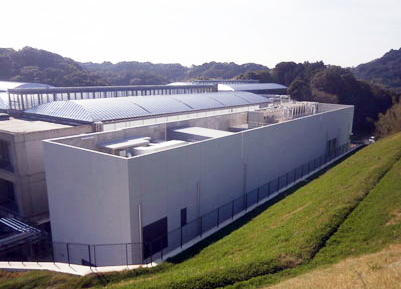 The new building is located on the site of Hamamatsu’s Industries Development laboratory (in Nishi-ku, Hamamatsu), where the company’s Power Laser Development Section works on projects related to laser fusion for power generation. Operations at the new building are scheduled to begin in February 2015.