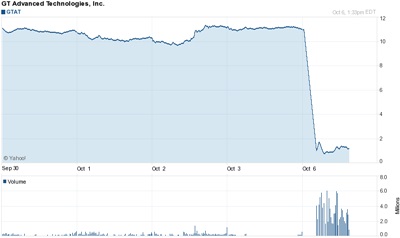 The company, which last year signed an exclusive deal to supply consumer electronics giant Apple with material destined for smart phones and other gadgets, said that it expected the court to allow it to continue to conduct business as usual while it tries to resolve its issues with a reorganization.

It had been due to webcast its latest quarterly business update last week, before postponing its conference call at late notice and rescheduling it for this week.

While the Merrimack firm pointed to the $85 million in cash on its balance sheet as evidence of its underlying strength, the company’s stock price plunged 90 per cent on the surprise announcement. That wiped more than a billion dollars from its market capitalization.

"GT has a strong and fundamentally sound underlying business," insisted CEO Tom Gutierrez. "Today's filing does not mean we are going out of business; rather, it provides us with the opportunity to continue to execute our business plan on a stronger footing, maintain operations of our diversified business, and improve our balance sheet.”

Stressing that the chapter 11 route offered the best protection and pathway to reorganization, he added: “We remain committed to our roots in innovation and our diversification strategy. We plan to continue to operate as a technology leader across our core set of businesses.”

In the short term, the plan is to seek so-called debtor-in-possession (DIP) financing. Such financing typically becomes senior to existing debts, and this was the method used for the 2009 refinancing of automotive firms Chrysler and General Motors in the aftermath of the global financial crisis.

If DIP financing is obtained, it would provide the company with an immediate source of funds needed to meet GTAT’s basic daily operations, like paying its employees on time.

Apple loan notes and prepayment
According to its various New Hampshire bankruptcy court filings, GTAT and its numerous subsidiaries have total liabilities of around $1.3 billion, owed to between 5000 and 10,000 creditors.

Meanwhile the company’s most recent quarterly filing with the US Securities & Exchange Commission (SEC) indicated that GTAT held some $333 million in cash and equivalents as recently as June 28.

On the other side of the balance sheet it listed a $294 million debt in the form of two sets of convertible notes due to mature in 2017 and 2020, as well as financial commitments that relate directly to the October 2013 agreement with Apple.

That “master development and supply” (MDSA) agreement set out a schedule under which Apple would provide some $578 million to GTAT in the form of a “pre-payment”. GTAT was to use the cash to build out its sapphire production capacity and to ramp volumes for the expected deployment in Apple’s various electronic devices.

Pre-payment repayment
Under the plan, Apple would own the Mesa, Arizona, facility where the sapphire was being made, while GTAT would own and operate the furnaces needed to produce the crystal. Hundreds of manufacturing jobs at the site – previously built and then abandoned by First Solar - were promised.

GTAT had then been due to reimburse those payments to Apple over the course of five years, starting in January 2015.

However, a clause in the Apple agreement states that GTAT’s obligation to repay the pre-payments could be accelerated under certain circumstances, “including if [GTAT] does not meet certain financial metrics or meet certain technical and performance covenants”.

In its latest SEC filing, GTAT said that it had “expended significant capital resources in order [to] convert the 1.3 million square foot building in Mesa, Arizona, into a sapphire growth and fabrication facility”.

The company added: “The capital resources expended in connection with the purchase and installation of production equipment and the costs incurred in commencement of operations have had a significant impact on our liquidity and financial results.”

As a result, the cost of producing sapphire at the Mesa facility remains, in GTAT’s words, “substantially above” its targets, which is likely to explain why Apple’s recent high-profile product launches are yet to feature the material in large quantities.

Notably, although the MDSA agreement specifies a minimum sapphire supply level that GTAT must maintain, it does not include any minimum purchase requirements by Apple.

“Our obligation to commence repayment of the prepayment amount will begin in January 2015, regardless of the quantities of sapphire material purchased by Apple,” GTAT acknowledges in its filing.

When called, GTAT said that it would not be providing any further information about the filing, other than what little it has made available on its web site here – although the reasons behind the timing of the bankruptcy filing may become clearer when Gutierrez and senior executives discuss quarterly results in GTAT's delayed investor call, currently scheduled for this week but at an as yet unspecified time.